Starbase 25 was a Starbase 25-type Federation starbase administered by Starfleet, located in orbit of a nearby planet.

For generations, the starbase hosted the annual Command Conference and corresponding afterparty. Sometime during the 2260s, James T. Kirk and Spock visited this station for the conference, but failed to gain entry to the conference's afterparty. The two ended up in a nearby dive bar, where they (or at least Kirk) drank the night away, eventually leaving their names behind, carved into the bartop. (LD: "An Embarrassment Of Dooplers")

In 2269, the shuttlecraft Copernicus, from the USS Enterprise, was transporting a Slaver stasis box to the base, when it was lured into the Beta Lyrae system by Kzinti privateers. (TAS: "The Slaver Weapon")

Beckett Mariner lived on the base sometime prior to the 2380s. In 2381, the USS Cerritos visited the base when it escorted a Doopler emissary to the station. Their arrival coincided with the date of that year's Command Conference. The station's commander was Captain John Anderson, who – upon observing the emissary the Cerritos was escorting to the base for trade negotiations begin to "Dooplercate" – denied the Cerritos permission to dock until its crew sorted the problem out. (LD: "An Embarrassment Of Dooplers")

The station was home to a large multi-level promenade containing a large shopping area with a number of eateries. According to Mariner, the station's promenade "kind of smells like pee sometimes."

Businesses such as Malvus' Goods, The Lucky Ferengi, and Mr. Krada Leg, were housed on the promenade. Since Mariner's previous time on the station, a Quark's Bar franchise location had opened on the base. 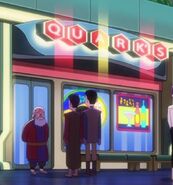 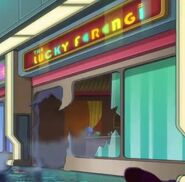 The base also housed a number of unspecified businesses, such as a casino, a barbershop, a fine men's clothing store, a Bajoran fashion kiosk, and an old dive bar.

Other locations aboard the station included an aviary, shuttlebay, and a large nightclub-like facility, known as Ballroom Alpha. (LD: "An Embarrassment Of Dooplers")

Station security was a civilian law enforcement agency that patrolled the station with karts, and with that, "terrible drivers". According to Beckett Mariner, "station security has a rep for being crooked," fearing that if they were to be arrested by them "[t]hey aren't gonna let us off with a warning and a glass of Thai iced tea. They'll coerce a confession, then sell our combadges on the black market." It was further noted that "[t]hey're always amped up on party day"– the day of the Command Conference afterparty. (LD: "An Embarrassment Of Dooplers")

The number of this starbase is spoken as "two-five" in "The Slaver Weapon" and "twenty-five" in "An Embarrassment Of Dooplers".

According to the revised Stellar Cartography: The Starfleet Reference Library (Alpha Quadrant: Local Space Extract), Starbase 25 was located in the Alpha Quadrant.