View source
watch 24:28
Star Trek Timeline [INTERACTIVE]
Do you like this video?
Play Sound
Multiple realities
(covers information from several alternate timelines)
This article or section is incomplete This page is marked as lacking essential detail, and needs attention. Information regarding expansion requirements may be found on the article's talk page. Feel free to edit this page to assist with this expansion.

Starfleet Security was an agency in Starfleet. This agency was one of the oldest with its origins dating back to the United Earth Starfleet. The agency was located at Fleet Operations Center in San Francisco, Earth, Sol Sector. The agency was responsible for safeguarding the Federation from internal and external threats, for conducting criminal investigations, and for guarding Federation facilities. (ENT: "Demons", directories)

Harris was a member of Starfleet Security until 2149, at which point he became a member of the covert operations group known as Section 31. (ENT: "Divergence")

In 2154, Commander Collins was an officer in Starfleet Security. When Doctor Phlox was abducted in San Francisco as part of a Klingon plot, she was in charge of the investigation. (ENT: "Affliction")

That same year, the dedication plaque of the Columbia NX-02 listed the names of notable officers assigned to this agency who protected the shipyard where the starship was constructed and tested. (ENT: "Affliction", Columbia dedication plaque)

In January of 2155, the directory placards at Starfleet Command's Fleet Operations Center, Sol Sector listed the names of notable officers who had offices at the center. (ENT: "Demons", directories)

In the 2260s of the alternate reality, information on this agency was located in the Federation database. (Star Trek Beyond)

This agency was mentioned in a list of Starfleet agencies, which appeared to the left of the personnel file for Balthazar Edison. [1]

In the 2350s, a secret group at Starfleet Security engaged in an illegal operation to develop a Starfleet phasing cloaking device, in direct violation of the Treaty of Algeron. The phasing cloak was tested aboard the USS Pegasus in 2358, under the command of Captain Erik Pressman, but ended in disaster when it appeared the Pegasus was destroyed. The entire affair was subsequently covered up by Starfleet Intelligence. Twelve years later, the Chief of Starfleet Security at the time, Admiral Raner, oversaw an operation to retrieve the experimental cloaking device. (ENT: "These Are the Voyages..."; TNG: "The Pegasus")

In 2367, Vice Admiral Thomas Henry, who was attached to Starfleet Security, boarded the USS Enterprise-D to observe a hearing overseen by former Starfleet admiral Norah Satie, concerning an attempt to uncover a supposed conspiracy at the heart of Starfleet. (TNG: "The Drumhead")

In 2369, the Lieutenant George Primmin was sent by Starfleet Security to Deep Space 9 to help protect a shipment of deuridium. (DS9: "The Passenger")

Starfleet Security had documented several incidents of Cardassians being surgically altered with the purpose of infiltrating an enemy. It was determined by the USS Voyager crew that Seska was another of these incidents – surgically altered as a Bajoran, she infiltrated the Maquis. (VOY: "State of Flux")

A Starfleet Security investigation determined that Ambassador Krajensky had been kidnapped or killed by the Dominion on his way to Risa. (DS9: "The Adversary")

In an alternate timeline experienced by Kim in 2372, Admiral Strickler had a meeting with the female head of this branch at eleven hundred hours. (VOY: "Non Sequitur")

In 2372, Admiral Leyton made Benjamin Sisko acting head of Starfleet Security in the face of the apparent Changeling infiltration of Starfleet. In this capacity, Sisko discovered that Leyton was using the recent bombing of the Antwerp Conference as an excuse to attempt to seize power by the military by instilling paranoia about the threat posed by the Dominion. Sisko subsequently uncovered Leyton's conspiracy, forcing him to resign, and returned to Deep Space 9. (DS9: "Homefront", "Paradise Lost")

After Sisko was attacked by a member of the Cult of the Pah-wraiths in early 2375, he gave a statement to Starfleet Security. (DS9: "Image in the Sand")

At some point in the mid-24th century, a Tal Shiar agent, loyal to the Zhat Vash and operating under the alias Oh, infiltrated the Federation Starfleet in response to the emergence of Soong-type androids. In 2385, Oh masterminded the Attack on Mars, destroying the Martian surface and costing tens of thousands of Federation citizens their lives. This operation was undertaken to manipulate the Federation Council into banning research into Synthetic lifeforms, playing into the Zhat Vash's longstanding anti-Synthetic agenda. The attack also had the unfortunate side effect of provoking the Federation into withdrawing its offer to assist in the evacuation of Romulan space -- leading to millions of Romulan civilian deaths when the Romulan sun went supernova in 2387. (PIC: "Maps and Legends", "Broken Pieces")

By 2390, Oh had become Chief of Starfleet Security. That year, she issued a Black flag directive to Captain Alonzo Vandermeer of the USS Ibn Majid, ordering him to murder Ambassador Beautiful Flower and his colleague Jana, android diplomats from Coppelius who had just made first contact with the Federation. Oh's order came on pain of the Ibn Majid being destroyed remotely with all hands. She then used her position within Starfleet Security to classify the entire incident, covering it up for the better part of a decade. (PIC: "Broken Pieces")

Oh continued to serve as Chief of Starfleet Security until 2399. That year, Oh oversaw a Tal Shiar operation that sought to assassinate Dahj Asha and Jean-Luc Picard on Earth itself, carried out by Zhat Vash subordinate Narissa, surgically-altered to create the identity of Human "Lieutenant Rizzo". When Picard reported his experiences to Starfleet, Oh disregarded an order from Starfleet Commander-in-Chief Kirsten Clancy to investigate Picard's claims of Tal Shiar agents operating on the Federation capital world, and then manipulated Dr. Agnes Jurati of the Daystrom Institute into infiltrating the crew of the civilian transport La Sirena. When former Starfleet Intelligence officer Raffaela Musiker deduced Oh's true allegiance, she abandoned her cover identity to lead a Tal Shiar assault on the android homeworld. (PIC: "Maps and Legends", "Broken Pieces") Her infiltration of Starfleet Security was fully confirmed when Captain William T. Riker of the USS Zheng He made visual contact with her while she was in command of the Tal Shiar fleet. (PIC: "Et in Arcadia Ego, Part 2")

By the 32nd century the previously civilian Federation Security was part of Starfleet. (DIS: "Rubicon")

Also, in the final draft script of ENT: "In a Mirror, Darkly, Part II", Admiral Black's bodyguard in that episode was said to be working for Starfleet Security in the mirror universe.

According to the Star Trek Encyclopedia (4th ed., vol. 1, p. 369), the prison guards from Star Trek III: The Search for Spock were wearing the insignia for Starfleet Security on their left breast. 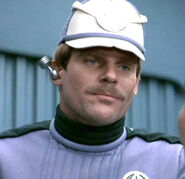