In the 2390s, the standard Starfleet uniform was reverted to a style similar to the late 2360s and early 2370s iteration. (PIC: "Remembrance", "Maps and Legends")

The uniform consisted of a black turtleneck undershirt, a pair of black trousers, and a black top with division colors displayed on both its shoulders and its high collar. Compared to the previous version, the 2390s uniform did not have a black stripe running over the division color and had small Starfleet deltas on the shoulder fabric, much like the uniforms from the alternate reality created by the arrival of Nero in 2233. (PIC: "Remembrance", "Maps and Legends")

Division colors from the previous iteration were continued. 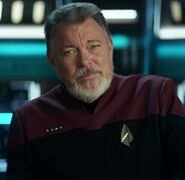 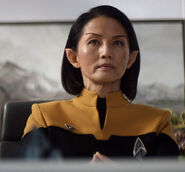 In a departure from the previous uniform style, rank insignia were moved from the turtleneck to the upper right side of the wearer's chest, against the officer's division color. (PIC: "Remembrance", "Maps and Legends", "The Impossible Box", "Et in Arcadia Ego, Part 2")

This variant was introduced by 2401. While similar to the previous version, this uniform top had a breast flap, no turtleneck and the rank insignia were again placed on the collar. (PIC: "The Star Gazer") 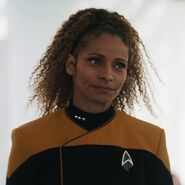 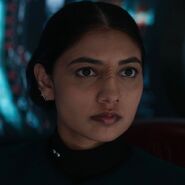 This version of the flag officer uniform had a completely different design, being dark grey/black colored with a red undershirt that had no turtleneck.

Unlike the standard duty uniform, it lacked the pattern detail of small Starfleet deltas anywhere on the fabric. (PIC: "Remembrance", "Maps and Legends", "Broken Pieces")

The version of the flag officer uniform in use by 2401 was more similar to the standard duty uniform, save for the addition of gold piping across the chest and sleeves. (PIC: "The Star Gazer")

The rank insignia were designed with silver pips. They replaced the gold pips placed on the collar that had been used since the 2350s, but retained the same number of pips for each rank. The pips of flag officers were placed on a dark gray isosceles trapezoid with a silver border.

Visitors to Starfleet Headquarters were required to wear a badge denoting that they were visitors. It was a silver, oval-shaped badge, with the Starfleet delta cut out horizontally, and the word "visitor" engraved above the delta. (PIC: "Maps and Legends")

The Starfleet uniforms seen in Star Trek: Picard were designed by Christine Clark. In designing the costume, Clark researched the lineage of Starfleet uniforms, noting: "we wanted to get a severity of lines to that, to take the color blocking [that had come before]; ...very structural, and geometric, and kind of simple." (TRR: "Away Mission Special")