View source
watch 24:28
Star Trek Timeline [INTERACTIVE]
Do you like this video?
Play Sound
Notice
It has been suggested that this article should be merged with Starfleet uniform (2370s-early 2380s).
You can discuss this suggestion on the talk page.

By 2380, a new Starfleet uniform was concurrently added to the existing design introduced during the mid-2370s.

This newer uniform was used on California- and Parliament-class starships, starbases, and planetary facilities, while the previous uniform continued to be used into the early 2380s aboard capital ships – such as the USS Titan and USS Archimedes – and Starbase 25. (LD: "Second Contact", "No Small Parts", "An Embarrassment Of Dooplers")

The standard duty uniform retained the color scheme and rank insignia previously established during the 2350s, with the addition of a double-breasted flap. Rank insignia were worn on the right side of the collar, while a combadge was worn over the left breast. (LD: "Second Contact", et al.; PRO: "A Moral Star, Part 2")

This version of the uniform had a white accent between the gray shoulder area and the division coloring, as well as division-colored lining of the breast flap. The combadge lacked the golden oblong backing present in the previous design, and featured only the Starfleet delta: a badge design not seen since the 2260s. (LD: "Second Contact", et al.) By 2382, this type of combadge had not replaced the previous style at Starfleet Command or other Federation facilities. (PIC: "Maps and Legends", "The End is the Beginning", "Nepenthe") 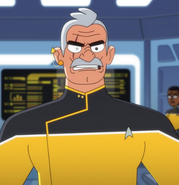 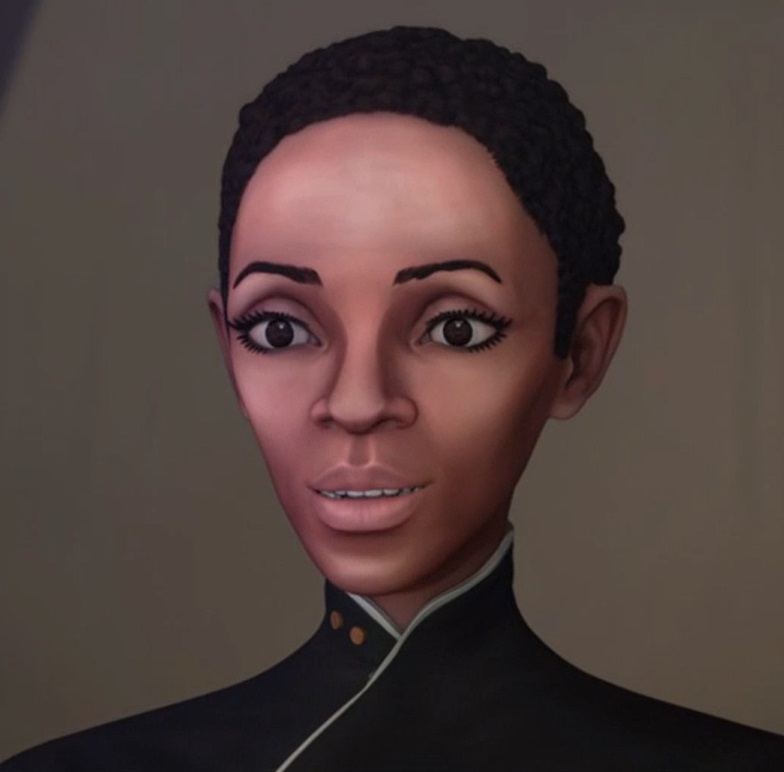 The standard boots worn by Starfleet officers with the first type of uniform were predominantly black, with division coloring on the top edges and soles. Their undersides featured the Starfleet delta with a "shooting star" pattern beneath it. Medical-oriented sciences division officers wore similarly-styled white boots with blue division coloring, while other sciences officers wore the standard black boots. (LD: "Second Contact", et al.)

Boots worn with this uniform variant were either black or entirely in division colors. (PRO: "A Moral Star, Part 2")

During a second contact mission on Galardon, Ensigns Beckett Mariner and Brad Boimler stripped down to their underwear as part of Mariner's plan of using their uniforms to lure and trap a spider cow. (LD: "Second Contact")

Additionally, undershirts were often worn beneath the uniform jacket. These shirts came in t-shirt and tank top styles, and ranged in color from white to khaki. (LD: "Second Contact", "Envoys", "Terminal Provocations", "Much Ado About Boimler", "No Small Parts")

Ensign Peanut Hamper, an exocomp, had the white accent and appropriate division coloring applied onto her body, including her "shoes". Her variant included the appropriate rank insignia, as well as a Starfleet delta or combadge, but lacked the standard uniform's double-breasted design and black "shoulders". (LD: "No Small Parts")

Additionally, the standard uniform could be tailored to accommodate members of certain non-humanoid species, such as cetaceans. (LD: "First First Contact")

The cadet's uniform was similar to the uniform seen in the 2370s, but lacked a divisional color on its shoulder area. Instead, it had a black shoulder area, making it appear similar to the acting ensign uniform worn by Wesley Crusher from 2365 to 2366. Unlike the previous uniform style, there were no class indicators on this uniform. (LD: "wej Duj")

This flag officer's uniform was very similar to the standard uniform, with golden epaulet-like patches on the shoulders, and yellow-gold accents between the neck area and command division coloring. Unlike the previous few styles, rank insignia were only worn on the right side of the collar, rather than on both sides. (LD: "Second Contact", "Temporal Edict", "Moist Vessel", "Crisis Point", et al.)

The first dress uniform style was very similar to the ones worn from 2370 to 2374, with the addition of a white accent between the neck area and division coloring that mirrored the design of the standard duty uniform. Brad Boimler referred to this uniform as a "skant". In 2381, Boimler considered wearing this option, but Beckett Mariner said that "nobody [wore] those anymore". (LD: "Envoys", "An Embarrassment Of Dooplers")

The second option, which was available by 2381, was a white and gold version of the standard duty uniform with matching boots. It resembled the dress uniform worn from 2375 to 2379, with the wearer's division denoted by colored cuffs on the sleeves of the jacket. (LD: "An Embarrassment Of Dooplers")

These uniforms were worn by crewmembers who served aboard the USS Protostar. Crewmembers Dal R'El, Gwyn, Rok-Tahk, and Jankom Pog changed into these outfits before returning to Tars Lamora to rescue their fellow slaves. The exception was the non-corporeal Zero, who painted their containment suit with colors representing these particular uniforms. Hologram Janeway switched her uniform appearance to the command division officer variant to match.

The uniforms worn by Protostar crewmen 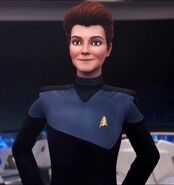 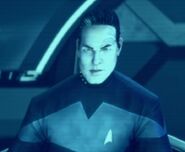 A video recording of Captain Chakotay wearing rank insignia
According to the Hagemans, these new uniforms and combadge are unique to this specific ship: "Since the USS Protostar is an experimental starship, we felt it gave us some freedom to create our own uniform design, as long as it fit alongside the uniforms of this era. We, [executive producer] Ben Hibon, and our design team spent a lot of time discussing the badge and uniforms. We had to balance the style of our series, while also recognizing these kids aren’t actually anywhere close to being Starfleet Officers, which is why we went for a stripped-down design." They added that, "we all know different styles of combadges often co-existed in the same era, and we knew we wanted something special for Prodigy." [1]

Members of Division 14 wore special uniforms that were similar to the standard duty uniforms, except that they were gray in color, lacked a double-breasted design, and displayed no visible rank insignia. Additionally, a black capelet was worn as part of the uniform, which either had the Starfleet delta emblazoned on it, or was used to hold the wearer's combadge. A black face covering resembling a surgical mask could also be worn with the uniform. Like the standard uniforms of this era, the Division 14 uniform could also be tailored to accommodate members of certain non-humanoid species, such as Edosians. (LD: "Much Ado About Boimler")

Security officers stationed at the Vulcan museum wore armored, maroon-colored uniforms that were similar to the ones worn by security personnel in the mid-2270s. (LD: "Veritas")

For missions on bog planets, olive-green waders and a belt could be worn over the standard uniform, to keep it from getting wet. The wearer's combadge was affixed to the outside of the waders. (LD: "Much Ado About Boimler")

During this era, Starfleet officers taking part in certain covert missions wore a black, tight-fitting, jumpsuit-style uniform with a hood.

This type of uniform lacked an insignia or any kind of outwardly identifying marks, similar to the ones worn in the 2360s. Single-sleeved and sleeveless variants of this attire also existed, which could be worn with additional accoutrements. (LD: "Much Ado About Boimler", "Veritas")

When Ensign Mariner was taken to sickbay to be treated for a stab wound following a mission to Gelrak V, she wore a white patient gown. (LD: "Temporal Edict")

After suffering minor catatonia and memory loss from seeing Zero's reflection, Gwyn was changed into patient wear for medical treatment. The attire was a medical version of the standard uniforms aboard the Protostar. (PRO: "A Moral Star, Part 2")

Charcoal-colored wetsuits could be worn by officers partaking in aquatic activities, such as riding on hydroscoots. (LD: "Crisis Point")

Fingerless gloves in division colors could be worn by officers with the second version of this era's standard duty uniforms. (PRO: "A Moral Star, Part 2")

This uniform was based on a rejected Robert Blackman design for Star Trek Generations. According to Mike McMahan, "there were kind of like designs that were used across all the series and we wanted to do something that felt like if you saw somebody cosplaying it, you would immediately be like "that’s TNG and that has to be the animated show," but it doesn’t not look Starfleet. I also just love that flap."

With regards to the transition into the Picard uniform, "There is a lot of stuff going on with Picard. Picard is doing a lot. What I’ll say is, if you are on a California class ship in the year 2380, you better be wearing that uniform." [2]