In the mid to late 2230s, a new Starfleet uniform design was introduced in place of the previous design, which had been used since the early 2230s. (DIS: "The Vulcan Hello")

In the 2250s, this uniform style was being used concurrently with another uniform design at least since 2254 aboard the USS Enterprise. (TOS: "The Cage")

This version of the Starfleet uniform was in use on the USS Shenzhou, USS Europa, USS Yeager, USS Discovery, USS Glenn, USS Gagarin and USS Hiawatha. (DIS: "The Vulcan Hello", "Battle at the Binary Stars", "Context Is for Kings", "Choose Your Pain", "Si Vis Pacem, Para Bellum")

It and the Starfleet uniform design being used concurrently were phased out and discontinued by 2259, due to a new design being introduced. (SNW: "Strange New Worlds")

The crew of the USS Discovery continued to use this uniform after rejoining Starfleet in 3189, albeit with the replacement of the original Starfleet insignia with the 32nd century-issue tricom badge. They switched to the then-current uniform design following Michael Burnham's promotion to captain. (DIS: "Scavengers", "That Hope Is You, Part 2")

The standard duty uniform was a jacket and pants with raised striping encircling the shoulders, five stripes for men and four for women, and down the side seam of the jacket and pants (six stripes for all uniforms). The jacket featured a split cowl collar with a division-colored zipper closure running slightly diagonally from the center line of the jacket at the bottom to the right side of the collar. The pants featured front thigh pockets also with division-colored zippers, and an apparent front fly. The shoulders, knees, and elbows had distinct textured fabric sections. (DIS: "Battle at the Binary Stars")

Female crew members could choose between a standard uniform jacket with pants, or one worn with a miniskirt over matching high cut shorts, worn with black hose and boots. (DIS: "Brother", "Saints of Imperfection")

Metallic Starfleet insignia were worn on the left breast. They featured a division insignia and rank pips carved into the badge; the reverse carried the wearer's name and serial number. (DIS: "Into the Forest I Go") The uniform included shin-high boots, with division-colored trim around the edges of the soles, and metallic division-colored Starfleet insignia boot clamps. (DIS: "The Vulcan Hello", et al.) This uniform was in use by at least 2239. (DIS: "Battle at the Binary Stars", ST: "The Brightest Star")

In this version, the jacket was Federation blue with division-colored striping and raised Starfleet insignia printed on the flanks of the jacket to the front of the division stripes, continuing onto the upper hip of the pants. The Starfleet insignias were also division-colored. There were at least three standard colors for the new uniform design: gold (command), copper (operations), and silver (sciences). (DIS: "The Vulcan Hello")

Worn by some crewmembers aboard the Shenzhou and the Discovery, this alternate version of the standard duty uniform was worn in all three divisions. The differences were a larger belt-like sash around the waist and short-sleeved arms. It was worn on the bridge and in other sections of the ship. (DIS: "The Vulcan Hello", "Context Is for Kings")

Worn by Commander Nhan aboard the Discovery, this alternate version of the standard duty uniform was worn in all three divisions. It had the long sleeves of the standard uniform and the side panels similar to those on the one-piece short-sleeved style. The skant was also worn with black tights and thigh-high black boots. It was worn on the bridge and in other sections of the ship. (DIS: "An Obol for Charon", "Such Sweet Sorrow, Part 2")

A slight variant uniform for captains included additional narrower division-color striping on the shoulder fabric, to the inside of the standard striping. (DIS: "The Vulcan Hello", et al.)

The flag officer uniform was very similar to the captain's variant of the standard duty uniform, but with the additional narrower shoulder striping also on the shoulder fabric to the outside of the standard stripes. Of note is that the colored stripes on the outside shoulder ran parallel to those on the inner shoulder and the main stripes. This is in contrast to the textured fabric on the outer shoulder of the standard and captain's uniforms on which the textured stripes intersected the main division-colored stripes. Flag officers also wore a different insignia: one with the Starfleet delta encircled by laurel leaves. (DIS: "Battle at the Binary Stars")

Cadets assigned to starships wore standard duty uniforms, but these were adorned with badges featuring the Starfleet delta inside a black rectangle with four gold stripes. (DIS: "Context Is for Kings")

Two variants of the above uniform were in use in Starfleet facilities like Starbase 5. Nearly identical to the medical division uniform, a white uniform worn by Starfleet doctors eschewed the insignias running down the sides of the uniform for plain, white panels.

Also at Starbase 5 were security officers wearing single-piece black uniforms with metallic division coloring on the shoulders. These uniforms were similar to the excursion uniform jumpsuit and featured a symmetrical zipper and collar. (DIS: "If Memory Serves")

A plain blue, utility jumpsuit was available for civilians or non-commissioned officers serving aboard Starfleet vessels in the 2250s. These were similar to the short sleeve version of the standard duty uniform, but featured no Starfleet insignias or division color stripes. (DIS: "Context Is for Kings")

In this version, used on the USS Enterprise as early as 2254, and described at that time as "the new uniforms," the divisions were distinguished by jacket color, and were generally described as gold for command division, red for operations division/special services, and blue for the sciences division, worn with black pants or skirt. (ST: "Q&A"; DIS: "Brother") Furthermore, rank insignia was now displayed on the wearer's cuffs by a series of stripes as opposed to pips on the arrowhead badge. The color-coding and rank insignia were similar to the style implemented across most starships by 2259. (SNW: "Strange New Worlds")

Variants of the uniform were used aboard starships like the Enterprise and USS Cabot by science officers. One such variant was identical to the sciences division uniform. However, this uniform lacked the black collar, with the division-specific color tunic continuing up to a high neckline collar. This uniform also featured a symmetrical zipper running straight down the front.

The uniform of this time had a tactical gear set that had a vest over a one-piece variant of the standard uniform which replaced the metallic piping with more conspicuous compression panels. The vest featured a flashlight on the shoulder and a round black badge with a silver Starfleet delta in the middle and the text "Starfleet Command" above it, along with a thigh-mounted holster for a Type 2 phaser. (DIS: "Battle at the Binary Stars")

During this time, Starfleet issued excursion gear. There was a desert variant with robes, head wraps, and goggles. (DIS: "The Vulcan Hello")

The suits without the life support gear

A third option for extravehicular activity was a standard spacesuit consisting of a form-fitting jumpsuit in varying color options and a white backpack, helmet, and magnetic boots. This suit had the unique feature of a helmet that unfolded over the wearer's head from the backpack portion of the uniform.

This spacesuit was available in a variety of metallic colors: gold, red, blue, silver, purple, and black.

In 2257, the USS Discovery and NI-1101 were stocked with these spacesuits. (DIS: "Brother", "Project Daedalus", "Through the Valley of Shadows")

Some shuttle pilots wore a flight suit that could be used both inside the shuttle and as an EVA suit. Other pilots wore regular uniforms. (DIS: "Context Is for Kings")

The Starfleet uniforms of this time had a thruster suit for spacewalks and missions outside of the ship requiring the individual to travel a great distance. It was a white space suit. The officer would wear a gold-tinted undersuit and cap underneath their space suit. (DIS: "The Vulcan Hello")

These thruster suits were kept in lockers in airlock areas aboard Crossfield-class starships. (DIS: "Brother")

Medical staff aboard starships wore an all-white version of the standard duty uniform, featuring silver sciences-division trim and Starfleet insignia. This uniform was worn with gray boots. (DIS: "The Vulcan Hello", "The Butcher's Knife Cares Not for the Lamb's Cry") 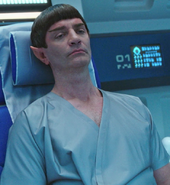 A black smock with a single epaulet on the left shoulder, bearing the Starfleet insignia, could be worn over a uniform in situations where the splattering of liquids could occur. The smock also featured a Starfleet insignia over the left breast. (ST: "The Trouble with Edward")

A type of grey robe was available for off-hours. (DIS: "The Butcher's Knife Cares Not for the Lamb's Cry")

While civilian prisoners wore gray coveralls, convicts who were members of Starfleet wore yellow coveralls with a grey Starfleet insignia. (DIS: "Context Is for Kings") War prisoners on Starfleet starships wore blue overalls, which could include additional restraints. (DIS: "Into the Forest I Go")

With the type B uniforms they went back to using stripes to denote rank. previously used in the early 2230s. (DIS: "Brother"; Star Trek)

In Bryan Fuller's original conception of the series that became Star Trek: Discovery, the Starfleet uniforms were to have been a subdued version of the primary colors from Star Trek: The Original Series' Starfleet uniforms. (Entertainment Weekly, issue 1476, p. 27) The uniforms ultimately seen in DIS were designed by Gersha Phillips, who opined that, while the original Starfleet uniforms were "great costumes, I just don't think they resonate anymore, and they don't resonate in 2259." She expressed admiration for the Star Trek: Enterprise jumpsuits, describing them as "grounded in reality [.…] I like the idea that they wear almost like a naval uniform or a NASA uniform." [2]

The Starfleet insignia badges were made in Toronto, Canada, by creating wax models from 3D prints, then producing plaster molds for silicon bronze to be poured into. The resultant bronze badges were subsequently polished and plated by a jeweler to give them the custom colors for Star Trek: Discovery. ("Star Trek Exhibition" at "Si Vis Pacem, Para Bellum" screening, Millbank Tower, London, UK, 5 November 2017) A collection of four of these badges were featured at Star Trek: The Exhibition in Blackpool, UK, and subsequently went on a world tour.

In the first season of Star Trek: Discovery, the black security badges had only been shown once: during the sequence where Burnham and her fellow prisoners are first being escorted to the mess hall just after boarding Discovery. They were later visible in the "bonus scene" from DIS: "Will You Take My Hand?", as shown at WonderCon 2018. This scene revealed that these badges were worn by those serving with Section 31, and the badges went on to make repeated appearances throughout the show's second season.

The Star Trek: Discovery novel Desperate Hours reveals that the uniform design used concurrently with this variation of Starfleet uniform was exclusive only to those serving on board Constitution-class starships.