In the mid 2270s, a new Starfleet uniform design was introduced over the previous design, with many different variations. Most were gray, white, brown, or beige, and came either in a one-piece jumpsuit or with matching trousers and tops.

These uniforms bore rank insignia on the sleeve or on shoulder tabs. The arrowhead emblem was adopted as Starfleet's overall insignia and was worn on the chest by shipboard personnel and flag officers. Base personnel, like those on Epsilon IX, continued to wear duty badges unique to their assigned base. 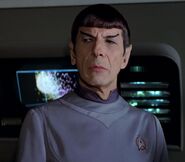 Spock's higher collar
Add an image to this gallery

This uniform design was identified by Robert Fletcher as the "Class A Uniform." (Star Trek: Costumes: Five Decades of Fashion from the Final Frontier, p. 43)
Kirk's uniform was originally the model intended be worn by all cast members. The director, Robert Wise, wanted a more monochromatic look, resulting in the several versions seen on screen. The actual color of this uniform is closer to a loden green than a grey, with white accents. (citation needed • edit)
In the alternate reality, by 2258 admirals wore a uniform and dress uniform similar to this. In the book Star Trek - The Art of the Film, Star Trek costume designer Michael Kaplan stated that the resemblance was intentional.

This uniform design was identified by Robert Fletcher as the "Class B Uniform." (Star Trek: Costumes: Five Decades of Fashion from the Final Frontier, p. 41)

The standard Starfleet uniform was a two-piece tunic that came in a blue-grey, beige, brown, or white color, including any combination thereof. The tunic was worn untucked, and had a life support monitor belt buckle. Rank insignia was worn as sleeve stripes, and an assignment patch showing a division color was attached to the tunic chest.

This tunic came with three variations of collars. The standard was a low flat collar, but there was also a V-necked flared collar version. The standard version could also be worn with a higher, more formal collar.

The higher collar worn by Spock looks to be from the same undershirt he wore with his Vulcan robes when he came aboard the Enterprise, suggesting he may have simply put his uniform on over it.

This uniform was also two-piece, and seen primarily among the USS Enterprise refit crew while it was in drydock. They were available in the same colors as the standard Starfleet uniforms, however were worn with a belt.

This uniform was worn by extras in the background on the bridge and in the rec room before the Enterprise departed drydock. The assertion that they are civilian uniforms comes from the lack of any Starfleet insignia and that they were absent on extras after the ship departed. The extras who wore these uniforms also considered themselves civilians. (citation needed • edit)

Crewmembers performing maintenance operations had the option of wearing a wraparound tunic. Its function is similar to the duty jumpsuits of the previous uniform style, and like those jumpsuits, it is worn with a black undershirt.

A thruster suit was an environmental suit with the addition of a thruster pack attached to the back.

Wardrobe designer Robert Fletcher stated in his personal notes (p. 1) that "the emblem is the same for all divisions, only the background colors change. The standard woven division patch is worn on the left sleeve of the engineering protection suit and some special duty uniforms."

This chart represents the rank insignia seen on screen throughout these uniforms' appearance. Production notes indicated that the rank of lieutenant junior grade might not have been in use during this period. Enlisted ranks apparently had no insignia. No commodore, vice admiral, admiral, or fleet admiral were seen, and any insignia is conjectural.

Overall, these uniforms were only used in Star Trek: The Motion Picture, though parts of them were recycled into the lab coats of the Regula personnel in Star Trek II: The Wrath of Khan and the red jacket uniforms seen in the next six films and episodes of TNG.

Wardrobe designer Robert Fletcher created a fourteen-page internal document used to depict his designs for the divisions, rank, and insignia seen throughout the movies.

George Takei stated that this version of the uniform was not comfortable, and that because of the way it was designed it required assistance to be removed – even for minor things such as using the restroom. He stated that the redesigned uniform featured in the rest of the films with the original series cast was brought about because of the cast's reluctance to film any further films with this version of the uniform. (citation needed • edit)

Retrieved from "https://memory-alpha.fandom.com/wiki/Starfleet_uniform_(mid_2270s)?oldid=2542570"
Community content is available under CC-BY-NC unless otherwise noted.