By the year 2382, the standard Starfleet uniform was again modified from its previous incarnation, returning to the collar of the uniform in the late 2360s, and the division colors of the early 2370s. (LD: "Second Contact"; ST: "Children of Mars"; PIC: "Remembrance", "The End is the Beginning", "Nepenthe")

By 2399, the Starfleet uniform would be modified once again. (PIC: "Remembrance")

The standard duty uniform consisted of a black long-sleeved undershirt, a black top and a pair of black trousers. The color of the shoulders and the angled sleeves indicated the division an officer belonged to: red for command, gold for operations, and blue for sciences. Unlike the late 2360s variant of the uniform, the division color did not stretch across the torso. A black stripe also ran through the division color, from the torso to the upper back.

Rounded rank insignia were worn on the right side of the mandarin collar, which was black regardless of the division color. The combadge, which returned to the design used in the 2370s, was worn on the officer's left breast.

Division colors were continued from the previous uniform iteration, except sciences blue, which became considerably deeper in color. The shade of blue adopted for the sciences division during this time had not been seen in Starfleet uniforms since the 2350s version was phased out. 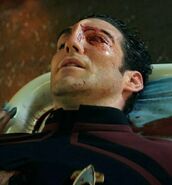 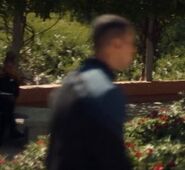 An officer in a sciences division standard blue uniform (2385)

The flag officer's uniform was very similar to the standard command division uniform, with the addition of gold accents below the shoulders and on the sleeves, both framed by the division coloring. (PIC: "The End is the Beginning")

A tactical vest could be worn over the standard uniform in combat situations. (PIC: "Maps and Legends")

Workers at Utopia Planitia Fleet Yards wore bright orange jumpsuits with two pockets on the sides of the legs. The sleeves of the jumpsuit were fastened around the worker's wrists with an elastic band, while an orange belt was strapped around their waist. A pair of protective gloves, which were black on the palm side and orange on the reverse side, were also worn. Non-android workers wore a brown hard hat, while android laborers did not. Android workers also lacked the badges present on the jumpsuits worn by organic workers. (PIC: "Maps and Legends")

A worker at Utopia Planitia Fleet Yards in 2385

The Starfleet uniforms seen in Star Trek: Picard flashback scenes were designed by Christine Clark. Clark noted, compared to the severity of the uniforms of 2399, "there's more of an elegance there... we wanted this graceful, beautiful tribute [to Patrick Stewart]" for the fans' first sight of Picard as an admiral. (TRR: "Away Mission Special")