Stephanie "Steph" Silvestri worked as production assistant on the seventh season of Star Trek: The Next Generation. She then moved to Star Trek: Deep Space Nine where she worked as a regular background actress and photo double for Terry Farrell. Her name can be seen on an okudagram in the TNG seventh season episode "Inheritance". Steph Silvestri, seen on the USS Pasteur dedication plaque in "All Good Things...", was also named after her.

In 1994, she worked as background actress on the comedy series Hardball, starring Bruce Greenwood and Mike Starr. In 1998 she worked as researcher for the television documentary Italians in America, narrated by Joseph Campanella. 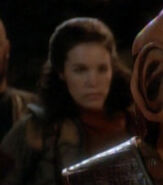 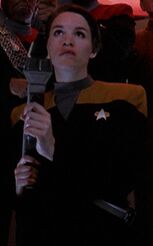 Retrieved from "https://memory-alpha.fandom.com/wiki/Steph_Silvestri?oldid=2464761"
Community content is available under CC-BY-NC unless otherwise noted.