On Star Trek: Voyager, Pisani frequently appeared as a Starfleet crew member (gold and black), who was seen throughout the run of the series and made it home to Earth in the final episode.

In "Prophecy", his character was on duty in the transporter room where he was attacked and can be seen being beamed off the ship horizontally, after being knocked unconscious by T'Greth (played by Sherman Howard).

Pisani appeared on page 118 of the May 2000 issue of Smithsonian Magazine in "Beauty and the Beasts," an article about the makeup effects on Star Trek: Voyager. He is having his alien makeup applied by Michael Westmore for the episode "Muse".

Pisani teamed up with fellow Star Trek stuntman and personal friend Christopher Doyle to produce a short film entitled "Norman J. Lloyd", in which he wrote, arranged and performed the music. In 2002 he did the playback and performed background vocals on Dennis Madalone's song and music video "America We Stand As One".

Green alien
DS9: "What You Leave Behind"
(uncredited) 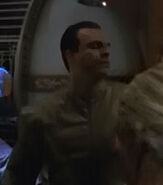 (as listed by IMDb)

Retrieved from "https://memory-alpha.fandom.com/wiki/Stephen_Pisani?oldid=2524050"
Community content is available under CC-BY-NC unless otherwise noted.