Tosin's henchman
Stephen R. Hudis (born 17 May 1957; age 63) is the stuntman, stunt actor, and stunt coordinator who performed stunts in several episodes of Star Trek: Voyager. He received no credit for his appearances. His costume as stunt double for Louis Ortiz was sold off on the It's A Wrap! sale and auction on eBay. [1]

Hudis was born in London, United Kingdom and visited the film sets at the early age of five, when his father, writer Norman Hudis, brought him behind-the-scenes. Influenced by this experiences, Hudis started a career in front of the camera and portrayed characters in episodes of Adam-12 (1970), The Psychiatrist (1971, with Pamelyn Ferdin and Kate Woodville), Ironside (1971), and The Mod Squad (1971, along Scott Marlowe), as well as the television movies Lassie: Peace Is Our Profession (1970, with Kenneth Tobey) and Sam Hill: Who Killed Mr. Foster? (1971, with Judy Geeson).

In 1972, Hudis landed the part of Charlie Schwartz in Mark Rydell's western The Cowboys along John Wayne and Star Trek performers Chuck Courtney, Gary Epper, and Tony Epper. His on-screen mother was played by his real life mother Rita Hudis. This performance was followed by appearances in television series such as Cannon (1972, with Vince Deadrick, Sr.), Emergency! (1972, with Kevin Tighe and Lenore Kasdorf), Mannix (1973, with Paul Carr), and After MASH (1984, along regulars Rosalind Chao and Wendy Schaal).

In the '80s, he also made his first experiences in the stunt business and performed stunts in the action drama Miracle Mile (1988, with Denise Crosby, Robert DoQui, Earl Boen, Raphael Sbarge, Brian Thompson, and Jenette Goldstein) and Wes Craven's horror film Shocker (1989, with stunts by Tony Cecere, Greg Gault, Dennis Madalone, and Patricia Tallman) and coordinated the comedy Round Numbers (1992, starring Kate Mulgrew and Samantha Eggar). He doubled actor Fisher Stevens in the drama When the Party's Over (1992, with Brian McNamara and Willie Garson) and Kris Kristofferson in the thriller No Place to Hide (1993, with Dey Young, Lilyan Chauvin, Kane Hodder, and Maria R. Kelly), performed stunts in the science fiction film Fist of the North Star (1995, with Malcolm McDowell, Clint Howard, Tracey Walter, and stunts by Johnny Martin and Scott McElroy) and the comedy Baby Geniuses (1999, along Christopher Lloyd and Kim Cattrall).

Beside his stunt work, Hudis also worked as transportation coordinator for projects such as the drama Viper (1988), the pilot episode of Beverly Hills, 90210 (1990), the thriller Love and a .45 (1994, with Jeffrey Combs), the television series High Tide and Live Shot (1995, with Karen Austin, Chase Masterson, and Marie Marshall), Stuart Baird's thriller Executive Decision (1996), the horror thriller Black Cadillac (2003), and more recently the action sequel Half Past Dead 2 (2007). Hudis also served as first assistant director for the 1986 film Pushed Too Far and the 1992 comedy Round Numbers and as second assistant director for thriller Blackout (1988, with Joanna Miles), the television thriller Illusions (1999), the horror film One Among Us (2005), for which he also served as producer and stunt coordinator, and the horror thriller Bad Blood (2006).

Hudis has performed stunts and coordinated for musicians such as Kelly Clarkson, Guano Apes, and Shakira and for companies such as Ford, Honda, McDonald's, and Hewlett Packard. He has been married to author and filmmaker Lindy Sternberger-Hudis since 2000, with whom he has two children. Also in 2000, Hudis set a World Record when he performed a 108 feet jump with a ten tons school bus over fifteen motorcycles. 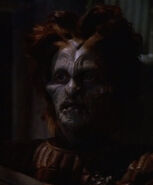 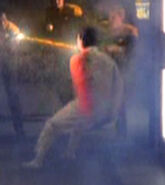 Retrieved from "https://memory-alpha.fandom.com/wiki/Stephen_R._Hudis?oldid=2505586"
Community content is available under CC-BY-NC unless otherwise noted.