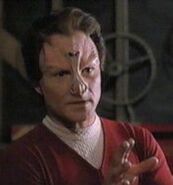 ..as Daelen
Add an image to this gallery

Steth was the name an unknown DNA thief lifeform was using when it was encountered by USS Voyager.

In 2374, it was rescued by Voyager before its ship's coaxial warp drive could explode. Once it was transported aboard, it won the friendship of the crew, most notably Tom Paris, who helped repair its ship. Once the repairs were completed, the lifeform switched DNA with Paris, effectively taking his appearance without actually switching bodies or minds, leaving him in its ship which shortly thereafter warped away.

The lifeform remained on Voyager to live out Paris' life, but began to exhibit erratic behavior. When it threatened Seven of Nine while intoxicated on duty, Kathryn Janeway called what she thought was Paris to her ready room. The lifeform then attacked and switched DNA with her when she became suspicious. When Tuvok arrived, having been called, he stunned Janeway, who now had Paris's appearance. Janeway was taken to sickbay.

Paris, in the form of Steth, along with the real Steth, in the form the lifeform it had previously inhabited, returned to Voyager, "Janeway" attempted to escape by taking a Class 2 shuttle with a modified coaxial warp drive. Paris was able to convince Chakotay that the lifeform had stolen his appearance, and Chakotay allowed Paris and Steth to pursue the lifeform and stop it before it could warp away.

The lifeform was played by Dan Butler as Steth, Robert Duncan McNeill as Tom Paris, Kate Mulgrew as Kathryn Janeway, and Mary Elizabeth McGlynn as Daelen.

The known chain of victims: Daelen to Steth to Tom Paris to Kathryn Janeway.

In the script he was described initially as "Steth", then, after trading bodies with Paris, the script notes: "From this point on, the chamelionic alien will be referred to as "Paris/Steth."

Retrieved from "https://memory-alpha.fandom.com/wiki/Steth_(impostor)?oldid=2517860"
Community content is available under CC-BY-NC unless otherwise noted.