Carnahan worked as stand-in for Edward Burns on the film 15 Minutes (2001, with Kim Cattrall, Kelsey Grammer, and Avery Brooks) and was featured in the films Jerry Maguire (1996, which also featured Mike Boss) and Buying the Cow (2002). Among his featured roles are also television series such as The Young and the Restless, Cybill, Days of Our Lives, Sliders (starring John Rhys-Davies), Frasier (starring Kelsey Grammer), and Almost Perfect.

More recently, he worked on the Desperate Housewives episode "What's the Good of Being Good" (2011, with Teri Hatcher, Vanessa Williams, Brenda Strong, Dakin Matthews, and Patrick Fabian), the short comedy Southern dysComfort (2012), the short drama Tropico (2013, with Roger Rignack), the comedy Fake (2015), and the short drama The Admired (2016, with Richard Riehle and Jeff Rector). 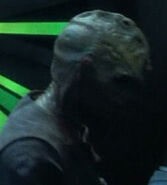 Retrieved from "https://memory-alpha.fandom.com/wiki/Steve_Carnahan?oldid=2558991"
Community content is available under CC-BY-NC unless otherwise noted.