Casavant was working as fitting model for William Ware Theiss.

Steve Casavant (also known as Steven Oliver) is an actor who appeared in over 10 episodes of the first season of Star Trek: The Next Generation. As a background actor he received no screen credit for his appearances. Oliver was hired to be the fitting model for the Starfleet uniforms and was hired as a background performer three months after this.

His Antican delegate character was identified by the name tag of his costume which was sold off on the It's A Wrap! sale and auction on eBay. [1]

According to Casavant, "From Season 1,Episode 7 "Lonely Among Us" the Selay(Lizard Aliens) and the Antican (Doggish aliens) which I [w]as an extra got to spend 3 hours in make-up and wear for 12 hours. In one shot I was sitting on floor behind the main Dog star and they had me bark. That was all I ever got to say in my whole experience as an extra for NG StarTrek." 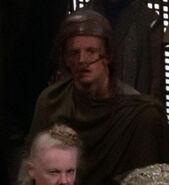 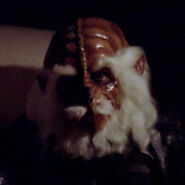 Alien musket-wielding soldier
TNG: "Hide and Q"
(uncredited)
Add an image to this gallery
Retrieved from "https://memory-alpha.fandom.com/wiki/Steve_Casavant?oldid=2391614"
Community content is available under CC-BY-NC unless otherwise noted.