Steven Boz is an actor and musician who appeared in several episodes of Star Trek: The Next Generation and the seventh Star Trek film Star Trek Generations. As a background actor he received no credit for his appearances and is also listed as Steven Bosnyak on several call sheets.

Boz studied acting under the acting coaches John Sarno and Helena Sorell and at Rick Walters Actors Playhouse. He appeared in commercials for Walt Disney, Skaggs Department Stores, L&M Cigarettes, and Frito Lay as well as in television series such as Scarecrow and Mrs. King, V.I.P., General Hospital, and Etorofu So Far.

His film appearances include the fantasy musical Moonwalker (1988, with Nikki Cox and Scott L. Treger), the thriller Cop (1988, with Jim Wilkey), the television action film Motorcycle Gang (1994, with Marshall R. Teague and Don McManus), and Heart and Soul. Boz also worked as professional model for print ads and magazines and is a member of the Screen Actors Guild-American Federation of Television and Radio Artists (SAG-AFTRA).

For several years he is working as a hard rock musician with his band, the Steven Boz band. Together they've performed around the world, in Japan and Los Angeles for example. In 2009 they've released the album "Heavy But Sweet". [1] 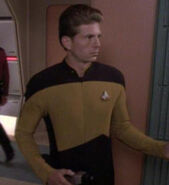 Retrieved from "https://memory-alpha.fandom.com/wiki/Steven_Boz?oldid=2701427"
Community content is available under CC-BY-NC unless otherwise noted.