Dr. Steven Novick, DDS is a celebrity dentist and actor who appeared as a background actor in episodes of three Star Trek television series. He also visited the set of Star Trek Nemesis and took a picture with Patrick Stewart.

As dentist, Novick has run his dental practice for over twenty-five years in Franklin Square, New York, USA. He has been married to Adrienne and the couple has three children, Peri, Max, and Teagan. 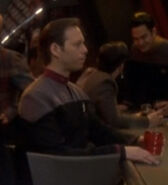 Retrieved from "https://memory-alpha.fandom.com/wiki/Steven_Novick?oldid=2416141"
Community content is available under CC-BY-NC unless otherwise noted.