Starfleet officer; Borg drone; Klingon council member
Stuart Phoenix Wong (born 5 September) is an actor who worked on Star Trek: Voyager and Star Trek: Enterprise. With the beginning of the fifth season of Voyager he took over the part of Garrett Wang's stand-in from John Tampoya. [1] In addition to standing-in for Wang and working as hand double on second unit on the final three seasons of Voyager, Wong also stood-in for a number of guest actors. He can also be seen as background actor in several episodes of Voyager and also worked on Enterprise.

Wong has been a member of SAG-AFTRA since 1998 and changed his SAG name to Phoenix Wong around 2013.

Starfleet officer
VOY: "Night", "Drone", "Once Upon a Time", "Latent Image", "Someone to Watch Over Me", "Relativity", "Drive", "Repression", "Flesh and Blood", "Homestead"
(uncredited) 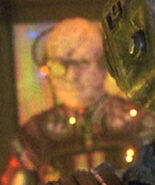