A stuffed animal was a toy created for children, which resembled an animal.

A stuffed animal was among the objects put out by Rianna Mayweather in order to make her son feel at home when he returned to the ECS Horizon in 2153. (ENT: "Horizon")

When Michael Burnham was a small girl living with her biological parents, she had a stuffed animal resembling a tardigrade. (ST: "The Girl Who Made the Stars") Years later, during the Klingon terror raid on Doctari Alpha in 2236, Michael clutched a stuffed rabbit while she hid in a cabinet. (DIS: "Perpetual Infinity")

In the alternate reality, when Lucille Harewood fell ill, she was supplied with some of her stuffed animals by her parents, including a stuffed cow and two different stuffed rabbits. (Star Trek Into Darkness)

In 2266, a stuffed animal based on the cartoon character Krazy Kat was in the possession of an Only girl on Earth Two. (TOS: "Miri")

Alexandra took a small stuffed animal with her when she was abducted by the Aldeans in 2364. (TNG: "When The Bough Breaks")

Molly O'Brien had a stuffed animal in her quarters aboard Deep Space 9 in 2369. (DS9: "If Wishes Were Horses")

B'Elanna Torres owned a stuffed Toby the targ doll that she took on away missions longer than a day. (VOY: "Tsunkatse")

Soji Asha owned a stuffed animal called Squoodgy. She believed she had possessed Squoodgy since childhood, and kept it in her quarters on the Artifact. (PIC: "The Impossible Box")

A stuffed animal owned by Alexandra 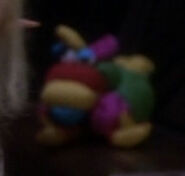 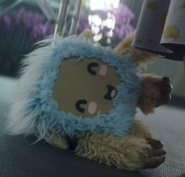 Squoodgy, owned by Soji Asha
Add an image to this gallery

Retrieved from "https://memory-alpha.fandom.com/wiki/Stuffed_animal?oldid=2479861"
Community content is available under CC-BY-NC unless otherwise noted.