Brooks; Multiple roles
Sue Henley is a former actress who worked as a stand-in and photo double for lead actress Kate Mulgrew as Captain Kathryn Janeway on all seven seasons of Star Trek: Voyager. She also appeared as Ensign Brooks in several episodes and was previously featured in several episodes of the second season and third season of Star Trek: Deep Space Nine. She worked as stand-in for several guest actresses and for Gates McFadden on Star Trek: Insurrection and appeared in other background roles in Voyager as well.

The character Henley in the episode "Learning Curve" was named after Henley. According to an interview with Henley, she did little background work on the first season because of her strong likeness to Mulgrew. Occasionally she wore a wig, which she described as a "hideous black dead-rat-looking wig". [1] Almost every time two "Janeways" are seen on screen and no computer effects were integrated, Henley worked as on screen photo double for Mulgrew, for example in the last episode "Endgame", where she replaced Admiral Kathryn Janeway in several scenes. Her costume from this episode was later sold off on the It's A Wrap! sale and auction on eBay. [2] Parts of her Starfleet uniform were also sold off and were worn by fellow background performers Alicia Lewis and Anna Deng. [3] [4]

Henley received screen credit for her part of Ensign Brooks twice throughout the series. She was credited as "Ensign" in the end credits of "Darkling" for her turbolift scene which she filmed on Monday 9 December 1996 alongside Robert Picardo on Paramount Stage 9. Here, she spoke her first words on the series, "Deck 10". Her second credit as "Ensign Brooks" was in the end credits of the episode "Year of Hell". Here she filmed her mess hall and corridor scenes on Thursday 14 August 1997 on Paramount Stage 9 and she spoke a second time on the series, "Seven".

Her work as photo double for Kate Mulgrew for the first season episode "The Cloud" was filmed on 2nd unit on Friday 6 January 1995 on Paramount Stage 8 but was later not part of the episode. In this episode only hand double Trisha Burton and an unknown pool professional doubled for Mulgrew.

For her appearance as Pelian pedestrian in the episode "Non Sequitur", she filmed her scenes on Tuesday 25 July 1995 and Wednesday 26 July 1995 on location at the New York Street backlot. Henley is listed twice as background actress on the call sheets of the episode "Future's End". The scene as a Santa Monica Beach goer was filmed on Monday 12 August 1996 on location at the Santa Monica Pier. On Tuesday 13 August 1996 and Wednesday 14 August 1996, Henley is listed as a car passerby with her own car for the scenes filmed at the Griffith Observatory.

During the filming of the third season episode "The Swarm" on Thursday 1 August 1996, Henley went to Paramount Stage 9 for a laser scan as a "Gudge" along with Tracee Lee Cocco and Louis Ortiz for the unreleased video game Star Trek: Voyager - Retribution. She had a makeup call at 10:00 am and a set call at 1:00 pm. On Friday 25 July 1997, Henley also worked as stand-in for Mulgrew for a video sequence of a Paramount Images CD-Rom video on Paramount Stage 9.

On the set of Voyager she met Keith Rayve, another regular background actor and stand-in. They bonded and married shortly after Insurrection. The couple has one daughter. Henley's work on Deep Space Nine and Voyager was her only work in the television and film industry. 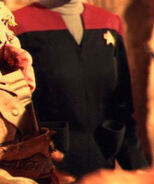 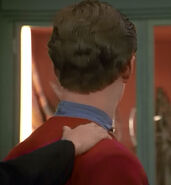 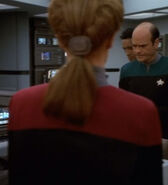 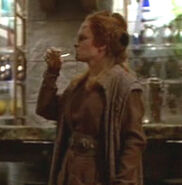 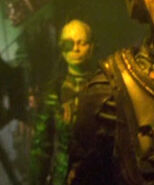