A survival suit was a type of cold weather gear worn during the 22nd century to 24th century.

The survival suit was a combination of a silver-metallic pants and jacket utilized by civilians and Starfleet alike. The jacket itself had a fixed hood and was padded with a fur-like fabric. It had two large pockets at the front, which could be closed, and two large pockets at either side at the back of the jacket, which could not be closed. The jacket itself was closed via four clips at the front. A combadge could be affixed to the upper left of the chest, where it had its own protective cover.

The pants had no pockets and were held up by built-in suspender straps which crossed at the back and ended just above the waistline. (ENT: "The Seventh", "Regeneration"; DS9: "The Ascent"; VOY: "Timeless") 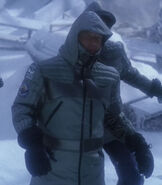 Twenty-second century snow pants
Add an image to this gallery
Retrieved from "https://memory-alpha.fandom.com/wiki/Survival_suit?oldid=2204569"
Community content is available under CC-BY-NC unless otherwise noted.