Varel; Jaya; Lenara Kahn; Borg Queen
Susanna Thompson (born 27 January 1958; age 64) is an actress who has played four characters in the Star Trek universe, most notably that of the Borg Queen in the Star Trek: Voyager episodes "Dark Frontier", "Unimatrix Zero", and "Unimatrix Zero, Part II". She has also played two characters in Star Trek: The Next Generation and portrayed Lenara Kahn in the Star Trek: Deep Space Nine fourth season episode "Rejoined". Outside of Star Trek, she is probably best known for playing the recurring characters of Lieutenant Colonel Hollis Mann in several episodes of the long-running CBS crime drama NCIS (2006-2015), and Moira Queen in the action-drama series Arrow (2012-2020).

She was born in 1958 in San Diego, California and earned her bachelor's degree in drama at San Diego State University, where her husband also works as a professor. She is also skilled in aikido and stage combat.

In a 2002 interview on The Vicki Gabereau Show, Thompson said she prefers to be called an actor as opposed to an actress simply because "it's a general term" that originated from the theater. [1]

Thompson made her television debut in the 1991 pilot episode of the long-running series Silk Stalkings before going on to guest star in two episodes of Civil Wars, the first alongside Norman Large. After her TNG roles in 1992 and 1993 respectively, she went on to appear in Bodies of Evidence, The X-Files, L.A. Law, and two episodes of NYPD Blue. In 1995, she appeared alongside future Deep Space Nine guest star Jason Leland Adams in an episode of Dr. Quinn, Medicine Woman before appearances in Roar, Prey, Players, Michael Hayes, and Chicago Hope.

In 1999, Thompson was cast to play Karen Sammler in the ABC series Once and Again (with Billy Campbell), which ran for three seasons before being cancelled. From 2002 onwards, she guest-starred in numerous series, including The Twilight Zone, Law & Order: Special Victims Unit, Still Life, Medical Investigation (with Neal McDonough, Robert Curtis Brown, and Larissa Laskin), and Jake In Progress, before gaining a lead role in the controversial, short-lived NBC series, The Book of Daniel. The show was cancelled in 2006 after just eight episodes, which saw Thompson's return to guest star roles. She later appeared in the popular CBS shows CSI: Crime Scene Investigation (with William Sadler) and Without a Trace (with Enrique Murciano) before gaining her recurring role in NCIS, in episodes which also featured John Billingsley and Scottie Thompson. More recently, Thompson had a lead role in the 2009 series Kings, however this was pulled from NBC's schedule after thirteen episodes. Her most recent television role is that of FBI Agent Diana Yates in Cold Case (2010).

As well as her many television credits, Thompson has also starred in numerous television movies, including Till Murder Do Us Part (1992), Ambush in Waco: In the Line of Duty (1993, with Jeri Ryan, Richard McGonagle, and Neal McDonough), In the Line of Duty: The Price of Vengeance (1994, with Dean Stockwell), Alien Nation: Dark Horizon (1994), America's Dream (1996, with Timothy Carhart and Tina Lifford), Bermuda Triangle (1996), and High Noon, which aired in 2000.

More recently, she portrayed Elaine Tanner in the television mini series The Gathering (2007, with John Stoneham, Jr.) and Moira Queen in The CW's television drama Arrow (which featured Roger Cross as a recurring guest star, and Brian Markinson, Jeri Ryan, and Jeffrey Nordling in one-time appearances).

While mostly a television actress, Thompson has also earned roles in a number of feature films. Her credits include the horror film Slaughter of the Innocents (1993, with Armin Shimerman), the romance When a Man Loves a Woman (1994), the comedy Little Giants (1994, with Courtney Peldon), and the drama Ghosts of Mississippi (1996, also starring Whoopi Goldberg, Virginia Madsen, Brock Peters, Terry O'Quinn, Jerry Hardin, Bill Cobbs, Spencer Garrett, Richard Riehle, Jordan Lund, and Thompson's "Next Phase" co-star Thomas Kopache), as well as Random Hearts (1999), Dragonfly (2000, with Casey Biggs and Lisa Banes), The Ballad of Jack and Rose (2005), and American Pastime (2007).

Of preparing for the controversial scene in "Rejoined", Thompson said in a 2003 interview "...the prep for it was to quickly try to understand what a Trill is and what type of backstory that they may have created that they didn't put down on paper for these two people. And then to work with Avery [Brooks], and he was really big on backstory, and just trying to give us a history. First time working on Star Trek where a director wanted me to come in prior to the first day you start shooting, so to get Terry [Farrell] and I together. I felt very safe with him." Of working with Terry Farrell, she further commented "She was great. She was just so easy and comforting, very focused with me. She had a great sense of humor and she worked really, really hard. This episode was very important to her. And I think she and Avery knew that. I'm not so sure about her history throughout the series but I know that a lot of her heart went into this episode too. And it was nice that Avery brought us in to meet each other. And I feel like I'm a pretty comfortable person and she certainly was, and Avery wanted us to have that contact. She was great to work with. I just loved it." (Star Trek: Deep Space Nine, Season 4 DVD Hidden File 04)

Thompson initially auditioned for the part of the Borg Queen in Star Trek: First Contact, but the role ultimately went to Alice Krige. When Krige became unavailable to shoot for Voyager, the producers remembered Thompson and asked her to return to audition for the episode "Dark Frontier." Of this, Thompson commented "I thought she created an amazing character for First Contact. So I used that sort of as a... as a springboard into what I brought into the audition and, er, they cast me!" She further went on to say "I think Alice set the blueprints and... so I used her blueprints and the rationale that I put behind it was that perhaps if that one really did, really was destroyed, but maybe sort of genetically there was a strain of her that still exists in the hive, in the collective. And, so I wanted to infuse my queen with her, but also allow the fact that I was going to interpret her slightly different and... allow that to be OK." However, the costume she had to wear was something she wasn't used to; "Jeri [Ryan] definitely gave me some moral support and some physical support. It was my first experience in the Borg Queen outfit and the contacts and the shoes and the makeup, and those type of hours. I will say that, and Brannon's [Braga] heard this all before, the first night after my first day of filming, which was, I think, twenty hours, I cried myself to sleep. And said I didn't care how much money they paid me, I wouldn't do it again! But I came back and I finished out that episode and then indeed I did come back again for "Unimatrix One" [sic] but I realized what I had learned from "Dark Frontier" was it just needs to be paced. It's really not fair for someone to put on contact lenses that have metal in them and expect that their eyes will survive the type of day a shoot day will, you know, ask of you. So, I just told them I really needed to have it paced, and then they gave me a break in between each day of shooting so that helped and, er... and they were pretty good at limiting the days, you know the hours, but still they're always very long days. But it's such a great character that's great to be able to work on." (Star Trek: Voyager, Season 5 DVD special feature "The Borg Queen Speaks" interview) 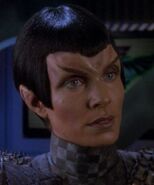 Varel
TNG: "The Next Phase" 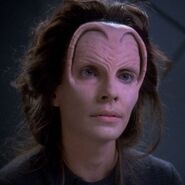 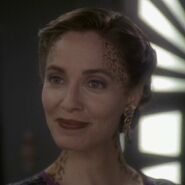 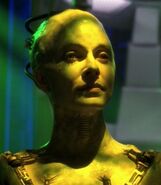