Sylvester "Sly" Foster (born 20 March 1956; age 64) is an actor who worked as a regular background actor on Star Trek: Voyager and also appeared in Star Trek: First Contact. He also worked as stand-in on some episodes, including for Rick Fitts on the fourth season episode "Year of Hell". Foster received no credit for his appearances.

Foster also worked as recurring background actor on the television series The Unit, NYPD Blue, Standoff, General Hospital, 24, The Shield, Monk, Mike & Molly, Rizzoli & Isles, Dexter (2006-2013, with Pablo Soriano and Dominic Rambaran), and Castle (2012-2014, with Penny Johnson Jerald). Other projects include the short action film Caught in the Middle (2009, with Henry T. Yamada) on which he also worked as executive producer, the short horror comedy Bad Jew (2014), and the horror film Hack House (2016, with Rob Steiner). 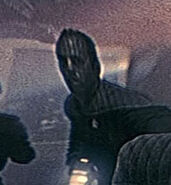 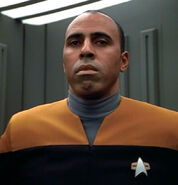 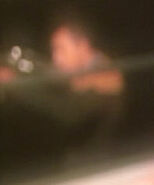 MacAlister
VOY: "The Fight"
(uncredited)
Add an image to this gallery

Retrieved from "https://memory-alpha.fandom.com/wiki/Sylvester_Foster?oldid=2532968"
Community content is available under CC-BY-NC unless otherwise noted.