Smith was born in Gulfport, Mississippi and has started her entertainment career as Miss Teen All-American pageant winner in 1989. She moved on and has appeared in television commercials (over ninety, for products such as Budweiser, McDonald's, and Miller Light beer), television series, films, music videos, and stage plays, beside her work as a model. She is probably best known as the Remarkable Mouth commercial voice, which she provided for several years. After winning the spokesmodel category in the casting show Star Search, she resided in Los Angeles and was photographed for over thirty magazines. Smith is still single. She works also as a director and producer for projects such as the comedy show Lana's Pupil. 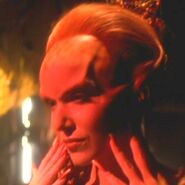 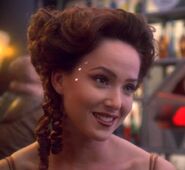 Dabo girl Aluura
DS9: "Profit and Lace"
Add an image to this gallery

Retrieved from "https://memory-alpha.fandom.com/wiki/Symba_Smith?oldid=2418632"
Community content is available under CC-BY-NC unless otherwise noted.