Star Trek: The Next Generation - Season One is a Blu-ray Disc release, featuring the complete first season of Star Trek: The Next Generation in 1080p high-definition. Released in July 2012, the set had an impressive debut in the United States, with more than 95,000 copies sold in the first week of release. [1] The Season One remastering work was completed by CBS Digital, supervised by Craig Weiss, Denise Okuda, and Michael Okuda. [2]

This set was the first Star Trek season set to have no corresponding DVD release, as CBS kept the 2002 DVD sets on the market, just in repackaged form. 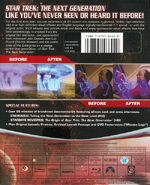 The original and corrected Region A discs

On 23 July 2012, the day before the set was released in North America, hundreds of movie theaters across United States and Canada held special showings of "Where No One Has Gone Before" and "Datalore", along with cut-down portions of the Blu-ray documentaries.

Two seconds of footage could not be located when CBS Digital remastered "We'll Always Have Paris" for this collection. Occurring twelve minutes, twenty-five seconds into the episode, this brief shot of actor Jonathan Frakes was included as an upconverted image from the original standard-definition videotape.

As noted on the Blu-ray packaging.

A number of episodes on discs 1, 3, 4, and 5 of the original release contained incorrectly-processed audio tracks and were missing a few visual effects. On 30 July 2012, CBS Home Entertainment and Paramount Pictures announced a free replacement program for the affected discs in the Region A release. [3] The four replacement discs were delivered to American purchasers beginning in late August 2012, and included a note of apology from CBS Home Entertainment. [4] The replacement Region A discs can be distinguished from the originals by locating the Starfleet insignia on the corrected discs.