Star Trek: The Next Generation – Season Six is a Blu-ray Disc release, featuring the complete sixth season of Star Trek: The Next Generation in 1080p high-definition. The set was for Region A released in North America on 24 June 2014. Region B has seen an additional German Steelbook Amazon.de retailer exclusive (pictured on the lower right) variant release. The Season Six remastering work was completed by CBS Digital. [1]

The special features include three audio commentaries, a new gag reel, deleted scenes and the documentary "Beyond the Five Year Mission: The Evolution of Star Trek: The Next Generation". [2]

An audio commentary with writer Morgan Gendel regarding his work on "Starship Mine" was originally intended for this release but a tight deadline rendered it impossible. An "In Conversation" roundtable discussion with the directors was also originally intended for this set but again scheduling conflicts made it impossible. This was made up with the "Beyond the Five Year Mission" documentary being expanded from two to three parts. [3] 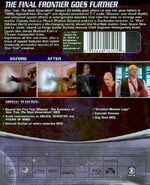