The following is a list of Romulan Tal Shiar personnel.

All four guards were played by background and stunt performers who received no credit for their appearance. 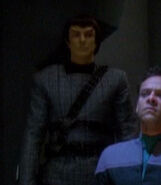 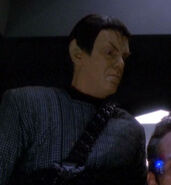 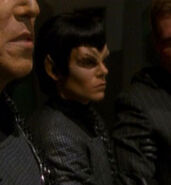 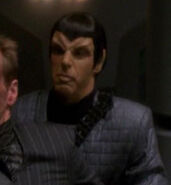 Played by Terry Van Zandt
Add an image to this gallery

These assassins were part of Narissa's first attempt to kidnap Dahj Asha in her Greater Boston apartment. They killed her boyfriend Caler and were responsible for her "activation". (PIC: "Remembrance")

These assassins were part of Narissa's second attempt to kidnap Dahj Asha, who was with Jean-Luc Picard at Starfleet Command. They were ultimately responsible for her death. (PIC: "Remembrance")

These operatives were part of Narissa's attempt to kill Jean-Luc Picard at his family vineyard in the late 24th century.

Though all were killed, the single survivor who was a Northerner by origin, was held captive and questioned by Picard, Laris, and Zhaban, before he ultimately committed suicide. (PIC: "The End is the Beginning") 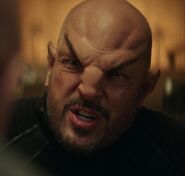 Played by Graham Shiels
Add an image to this gallery

This operative was a member of the Tal Shiar in 2371. She was contacted by Commander Sisko regarding the death of the Flaxian assassin, Retaya, following his departure from Deep Space 9. The operative fully acknowledged responsibility for the destruction of his ship, stating that he was "wanted for crimes against the Romulan Empire" and that "his execution was perfectly legal." The operative was also aware of the Cardassian, Elim Garak, aboard the station; incorrectly noting him as a "cobbler". (DS9: "Improbable Cause")

These two guards accompanied Tal Shiar vice-chairman, Senator Vreenak, on a diplomatic mission to meet with Weyoun on Soukara, as well as a secret stop at Deep Space 9 in 2374. Both guards, along with Vreenak, were subsequently killed while en route back to Romulus when their shuttle was destroyed by a bomb planted by Elim Garak. (DS9: "In the Pale Moonlight")

Both guards were portrayed by background performers who received no credit for their appearance.
The
Star Trek Customizable Card Game gives the first Romulan's name as Parthok, and the second Romulan's name as Navok.

Zhaban's mother was a Tal Shiar operative who once revealed to Laris details of the rumored Zhat Vash organization. (PIC: "Maps and Legends")

These eleven females – led by Oh, and included Narissa, and Ramdha – were members of the Zhat Vash, who experienced the Admonition together in 2385 on Aia. Many killed or brutally maimed themselves upon witnessing it. (PIC: "Broken Pieces") 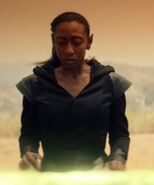 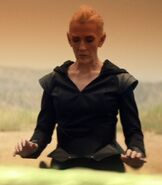