I don't understand why we have some of the Constitutions with their registries, and then on the Conny page, there's only question marks. I can understand why, but I think this would confuse a fair number of people... Mariner 3:50, 16 DEC 2003 (EST)

Based on discussions in other articles, I've removed the list of most of the Federation-class ships in the big list. I left the Entente (which is definitely canon) and the Federation as the class ship. -- MinutiaeMan 15:41, 17 Jan 2004 (PST)

Well, that still leaves the problem of the overlapping registries, especially where the Oberth and Hermes are concerned. I am curious though, should we use the Registry Suggestion(X) Masaso came up with, or simply ignore them? I for one would prefer to have them used, because the site already considers TAS "canon," and that's where the letter-registry idea originally came from... --Mariner 10:51, 28 Mar 2004 (PST)

I haven't read this registry suggestion yet, but I think we should not use any inofficial system - at least not without very major changes to the canon policy. Even without such obvious "deviations" from canon, some "additions" are already creeping in. -- Cid Highwind 14:30, 28 Mar 2004 (PST)

For our purposes (i.e. Memory Alpha), any Hermes-class ship not mentioned on-screen doesn't exist. That means that there's no registry conflict. It only exists if you grandfather FJ's entire Hermes-class list into the Trek canon — and I don't think we want to do that. -- Dan Carlson 15:59, 28 Mar 2004 (PST)

What about the double asterisks that are marking some entries? They aren't explained anywhere on the page. At least some of them seem to mark "disputable" information, in which case I'd prefer dropping it altogether (at least from this list - it could appear as a note on the articles about those ships). This also includes the (yet unmarked) registry of the assumed first USS Dauntless. -- Cid Highwind 09:30, 28 Mar 2004 (PST)

Those are leftovers from the list's incarnation in my own Starfleet Reference Databank. They're supposed to indicate uncertain or debatable data points. You can go ahead and remove them if you like. -- Dan Carlson 15:59, 28 Mar 2004 (PST)

Well, we list the USS Federation because the USS Entente was mentioned in TMP, and we know it is listed as Federation-class in the Franz Joseph tech manual. The USS Columbia, also mentioned in that film, is listed as Cygnus-class. (not Hermes-class as was previously listed in this list). I thought we were only adding elements of the manual that had some basis onscreen, this does. --Captain Mike K. Bartel 17:59, 13 Jun 2004 (CEST)

beaten to my comment, thanks Kobi. This is from the original text, not any fandom retelling. There are clearlly marked sections for each individual class--Captain Mike K. Bartel 18:53, 13 Jun 2004 (CEST)

And it hasn't been a long time since i was in the FJ book, it is open in front of me. Page TO:01:04:14 is a schematic of the Hermes-class, labeled CLASS I SCOUT. The next page is TO:01:04:15 and is labeled SCOUT CLASS authorized construction. There are three separate class sections,

This information is frequently misinterpreted, but i believe a number of users here share my interpretation, that if we are going to consider data from the Tech Manual as a reference to these canonically mentioned ships, we should at least do it accurately. --Captain Mike K. Bartel 23:22, 13 Jun 2004 (CEST)

The fact that the ships that follow have a suffixed class number, but remain in the Hermes class list, seems to indicate to me that they are variants or sub-classes of the Hermes, not an entirely new class. The Columbia should therefore, IMO, be a Hermes-class vessel, variant II (or b). -- Michael Warren 20:11, 14 Jun 2004 (CEST)

To be honest, after reading the discussion above, both classes seem to be equally non-canon. We shouldn't have a discussion about which of these class names to list, but remove that one completely instead (use Unknown). -- Cid Highwind 21:12, 14 Jun 2004 (CEST)

Except that the validity of the Star Fleet Technical Manual for use in articles has not yet been ruled on. I started a poll about this days ago at Memory Alpha talk:Canon Policy, but no-one else has responded as of yet. -- Michael Warren 21:16, 14 Jun 2004 (CEST)

Well, Undecided basically means No because we have to fall back to our generic canon policy. I missed that poll, though, and will add my opinion later. -- Cid Highwind 21:41, 14 Jun 2004 (CEST)

Also the case is different here. Obviously the Technical Manual was the source for the USS Cygnus (as were the Entente, Revere and Monitor), Technical Manual: 1977, TMP: 1979. It was taken from the book not the movie as it was in the follow up TMs, that is why it has to be included. -- Kobi 21:22, 14 Jun 2004 (CEST)

With the policy currently in use, this doesn't make a difference. If this is the source that was used, it should definitely be noted in the Background section of that ships article - but not in this list. -- Cid Highwind 21:41, 14 Jun 2004 (CEST)

I have no problem with using the starship classes from the FJTM, since it's been pretty well established already that they were used in the computer display screens for ST2 and ST3. However, I'm still not convinced of Mike's arguments about the use of the name Cygnus -- are we supposed to believe that there were three separate classes of starship that looked completely identical? If they're identical, that means they're the same class -- the Hermes class! -- Dan Carlson 21:39, 14 Jun 2004 (CEST)

Except, there is no visual evidence of the Cygnus and Monoceros classes in the Manual. Therefore, we don't really know if they're identical. The primary source clearly says it's a Cygnus class. It also doesn't explain what Mark-VIIb means, so any theory that all these ships look the same or are simply subclasses of eachother is mere speculation, and is even further from canon than simply quoting the Manual! -- Harry 22:49, 27 Sep 2004 (CEST)

I've come to agree that the class name is the result of an interpretation that might be 'correct' but might not, so it is a speculation better left unmade here. I've withdrawn my accuracy note.

I agree, these classes have definitely been seen onscreen, so they are well deserving of their own articlespace. I've mentioned this at Talk:Canon. --Captain Mike K. Bartel 01:19, 20 Jul 2004 (CEST)

Are there two Surak classes?

As an aside, I understand why two classes of starships arose named after Surak arose. Surak is a cool guy. I know a certain fascistic two-election-fixing war-of-aggression-starting theocrat who could truly benefit from the philosophy of Surak. --Ŭalabio 07:07, 2004 Dec 2 (CET)

The ships from "Court Martial" (just qualified with numbers NCC-...) seen on a display screen behind Stone seem not included here or anywhere on this site. - Philoust123 15:37, 5 March 2006 (UTC)

Actually, they have. Here's what is on the chart, with parenthesis pointing to the correct page:
Hopefully, that'll help you.--Tim Thomason 16:25, 5 March 2006 (UTC)

Starship Deploy Status list from "The Measure of a man"

There's a "Starship Deploy Status" list in the court room on Starbase 173, seen in "The Measure Of A Man".

Unfortunately, the list is always out of focus and one cannot make out the names of the ships.

The chart has 4 columns, the first one for the names of the ships, the second one seems to be for the registry, the third one - no idea, and the last one shows the status of the ships. (You can make out "Deep Space Exploration Sector XX" on Screenshot number 4, the four last ships on the list seem to be on the same mission)

Maybe someone has the list somewhere, maybe it's in a book or magazine, don't know. Maybe it was seen in another episode? Those things have the tendency to show up again... I'll upload 5 screenshots of the list here, anyway. --Jörg 15:33, 21 March 2006 (UTC) 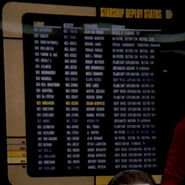 5
Add an image to this gallery

Michael Okuda does not have any info on these lists regarding the ships, registries, commanding officers. Here is a discussion about this, but I think Jörg knows about this. Any updates? [1] Tom 15:26, March 28, 2011 (UTC)

Both. I suppose technically there should be a third "Starfleet starships" to differentiate between the PD and PD-void vessels. Personally, I would rather we not have the civilian list, which I questioned once before but cant seem to find the discussion about it, and was "overruled". --Alan 12:32, 12 September 2008 (UTC)

I'm thinking notations linking to the bottom of the article would be better than a Remark column, as the Remark column has 7 entries for 200 plus starships. 31dot (talk) 14:22, November 18, 2012 (UTC)

Hello, how do you know if WEB Dubois or USGS Powell,by example, are federation civilian vessels ? Why others vessels are not noted on that article ? How did you choose ? C-IMZADI-4 (talk) 21:46, January 1, 2013 (UTC)

I was going to go into a long rant about how redundant this page title is:

How does the term "Federation starships" not immediately suggest non-civilian origins whereas we would need to qualify this article with the term civilian? "Federation" would be everybody, and "Starfleet" would be Starfleet, so Federation starships would equal civilian and Starfleet, while Starfleet would only be Starfleet, therefore "civilian Federation" seems terribly redundant. The only real dialogue reference I can find that takes it that extra step was stated by Telek R'Mor in "Eye of the Needle", where he stated: "You say you are a Federation ship. Are you a Starfleet vessel?"

But of course, every instance I can find of the use of the term "Federation starship" refers to a "Starfleet vessel" – which would also be the alternative term to Federation starship, but then that would introduce United Earth vessels into the mix, which we don't want.

Retrieved from "https://memory-alpha.fandom.com/wiki/Talk:Federation_starships?oldid=2374615"
Community content is available under CC-BY-NC unless otherwise noted.