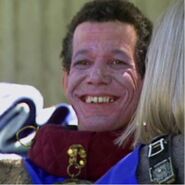 I don't know were the background information stating that the blue guys in TUC were meant to be the same species as the female purple ambassador from "Journey to Babel" comes from, but could it be that this background bit doesn't refer to the blue guys, but to another alien present during the Khitomer Conference scene?

I'll upload two screenshots, one clear image from the TUC DVD Special features and one actual screenshot from the movie (albeit very small). Both show the same guy (compare the robes and collar he's wearing) and he does have the same purple complexion as the ambassador from "Journey to Babel" (or for that matter the bearded councilor from Star Trek IV). So, could this be another member of the purple Federation member species? --Jörg 18:20, 25 February 2006 (UTC)

When TUC was released, I remember a newspaper article written by an extra. He was hoping to play a Klingon, but the costume people convinced him that playing one of the "Purple Federation members" was cooler. IIRC, he had bluish skin and a wok-shaped hat. He gave the backstage name for the species, but, unfortunately, I no longer have the article and do not know where it was published--StAkAr Karnak 21:37, 9 August 2006 (UTC).

Sorry that no one answered until after you went to the trouble of adding the alien, but the reason they're not here is because the species was named in background sources and they thus have a page of their own. I'll remove the section here again, but I'll add the picture you've uploaded to that page, so not everything you've done was for nothing :) In case you're wondering how to avoid things like this in the future, all images for a certain episode or film are collected in a category, so taking a look there it is a handy check if anyone else has done work on a certain something yet. -- Capricorn (talk) 18:42, July 4, 2015 (UTC)

User:Mark Gonzaga made a number of in-line comments on the article (breaking the format, etc), so I've removed them to here, and tried to keep them relevant to the sections they were in:

Klingon Khitomer attendee 7
This Klingon actor and I knew each other previous to filming. His first name is Michael. I do not recall his last name.

Alien delegates with yellow-skin
I am Mark Gonzaga, Vulcan Noble Delegate. Information about this actor and filming. I forgot his name but on one of the 4 days of filming the conference he had a severe claustrophobic reaction to the prosthetic make-up and as I strongly recall, was given some kind of a sedative to calm his nerves encases in the make-up for the long days. The 1st day of filming for all of us at the Khitomer Conference was 15 hours, the 2nd day was 17 hours, the 3rd day was 15 1/2 hours and the final 4th day was 23 hours! For the wrap filming at Brandees University library, boxes and boxes, a mega amount was purchased and delivered to the library/Khitomer set for all of us to enjoy....then we wall went our separate ways home, after being put up for 3 days in a local hotel and shuttled to the set each day.

Vulcan delegates
Hi, Should you care to know, .... I am Mark Gonzaga, Vulcan Noble Delegate ABOVE listed after 2.jpg and before 4 jbg. BOTH women on either side of me had naturally blonde, long hair which was sprayed black for ST6 by "hair" each morning. My hair is chestnut brown and done black for the four days of filming the conference scenes. That gal on my left is Geri though I do NOT remember her last name. Geri was a huge Star Trek fan, coming to work in her Star Trek fringes hanging beaded T-Shirt. The gal on the other side of me is a Swedish actress. I do not recall her name. I knew all of their names during filming but the years pass and memory goes. I hope that information helps. To clarify you are looking at the right gals on each side of me, my Vulcan photo is shown if you GOOGLE: Mark Gonzaga Star Trek Vulcan

Retrieved from "https://memory-alpha.fandom.com/wiki/Talk:Khitomer_Conference_attendees?oldid=2394751"
Community content is available under CC-BY-NC unless otherwise noted.