In ENT: Anomaly, is the Ossarian ship model a re-use of Voyager, albeit with different colouring, some additions to the top of the saucer and re-sized? 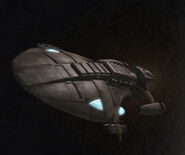 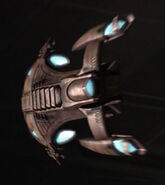 I see what you mean, but I think it looks completely different. It didn't occur to me that it might look like Voyager at all. DaveSubspace Message 01:56, 11 December 2008 (UTC)

It shares the same basic physical arrangement, but that is about it. --OuroborosCobra talk 04:23, 11 December 2008 (UTC)

Thanks. In retrospect there are some quite obvious differences (the nacelle struts for one). I guess the saucer section threw me off a bit. I might have had the armored Voyager in mind at the time too.

Anony. (Sorry, not quite sure how to sign/etc properly without an account)

I just watched "Anomaly" and the Osaarian never said their ship was heavily armed to begin with. How do we know whether they started with those weapons or got them through piracy? – The preceding unsigned comment was added by Mitchz95 (talk • contribs).

I've removed the following note, as it actually doesn't apply to the Osaarian merchant ship (I mistakenly added it here, so apologies for that):

This script info is actually in relation to the derelict craft nearer the start of "Anomaly". However, I have no idea where the entry for that craft is, nor what it's called (if it even has a name). Assistance with that would be much appreciated. --Defiant (talk) 11:12, January 5, 2016 (UTC)

Retrieved from "https://memory-alpha.fandom.com/wiki/Talk:Osaarian_merchant_ship?oldid=1795093"
Community content is available under CC-BY-NC unless otherwise noted.