The Tarchannen III species were a non-sentient species native to the planet Tarchannen III. They had a characteristic mimetic ability that made them nearly invisible. A radiant reaction in the skin simulated light and acted as a kind of biological cloaking device. This, coupled with their low body temperature, made them nearly impossible to detect, although the effect of their skin could be overcome by ultraviolet light.

Reproduction in the species was accomplished by embedding a parasite into the thymus of a humanoid host. The parasite then used the host's immune system to spread genetic instructions, transforming the DNA of the host to match its own. This virus produced cells with weak cell walls, and contact with the cells themselves was not contagious. Depending on the host species, the parasite could lay dormant for five years before these changes started.

In 2362, the 49-member crew of the Starfleet outpost on Tarchannen III was infected and underwent the genetic changes. With no word of the event to Starfleet, the USS Victory was dispatched to investigate the crew's apparent disappearance, but found no trace of the missing personnel. In 2367, the members of the Victory away team that had investigated the disappearance began to desert their post and return to Tarchannen III. It was discovered that these crewmen, including Geordi La Forge, were infected by the parasite and transforming into the Tarchannen III species.

In the case of Lieutenant Commander Susanna Leijten, as observed by Doctor Beverly Crusher (CMO, USS Enterprise-D), the parasite had remained dormant for five years before beginning to transform Leijten's DNA. The patient first began to exhibit symptoms of anxiety. Tests showed that her blood chemistry was abnormal and that she had a histamine response to something unknown. Dr. Crusher then performed a complete blood and tissue analysis, but the tests were inconclusive. Leijten began to suffer tremors in her hands, and increased visual sensitivity. Shortly after this she collapsed and it was discovered that she had blue vein-like growths on her neck and that two of the digits of her right hand had grown into one. The patient's physical form continued to rapidly change. The growths soon covered her entire body and her eyes changed color. She developed a strong sensitivity to light and her blood pressure dropped. Dr. Crusher administered a T-cell booster to attempt to stabilize her immune system. An examination of a cell taken from her skin showed it to be identical to alien cells found during an earlier investigation of the missing crewmen. As Leijten was not herself contagious, Dr. Crusher was able to continue further study. She discovered the location of the parasite in Leijten's thymus, as well as the nature of its operation. She was able to remove the parasite and regenerate the DNA of the patient. Dr. Crusher was able to successfully replicate this procedure with Geordi La Forge; however, for Mendez and Anthony Brevelle, there was no hope. (TNG: "Identity Crisis")

Mendez and Anthony Brevelle as members of this species were played by background actors Brian Phelps and Mark Thompson. Randy Pflug appeared as the humanoid shape that was seen on the holodeck. 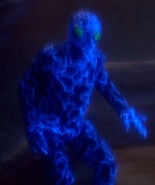 According to an internal reference document, listing all the aliens seen in Star Trek: The Next Generation, which was circulated around the time of the production of TNG Season 5, this species was identified as "Tarchannes". They were further given the description of "non-sentient humanoid race, frightened by normal light and visible only under ultra-violet light".