Ayala; Satan's Robot; Enterprise-D medical technician; Multiple aliens
Tarik Ergin (born 7 June 1961; age 61) is an actor who was a regular background actor for all seven years of Star Trek: Voyager, playing Lieutenant Ayala. Because of his status as a background actor, he was rarely given lines and was only credited twice: in the episode "Fury" as "Security Guard" and in "Renaissance Man" as "Tactical N.D.", even though he worked at the conn station in that episode.

His first role on Star Trek was in Star Trek Generations, where he played a background medical technician in sickbay aboard the USS Enterprise-D. He wore the Satan's Robot costume from The Adventures of Captain Proton holodeck program in the episodes "Night", "Bride of Chaotica!", and "Shattered" and played a Hirogen in at least one episode of Star Trek: Voyager. Occasionally, he worked as stand-in for guest actors such as for Judson Scott in the fourth season episode "Message in a Bottle". The call sheets for this episode featured the note "(w/HEELS)" which meant Ergin had to wear shoes with heels to stand in for Scott. According to the call sheet for the Star Trek: Enterprise first season episode "Fortunate Son", Ergin had a height of 6'4".

Several costumes worn by Ergin were sold off on the It's A Wrap! sale and auction on eBay, including the Satan's Robot costume, [1] the Hirogen hunter costume, [2] his Maquis vest from "Caretaker", [3] his command division uniform, [4] and a pair of Maquis boots. [5]

In the interactive video game Star Trek: Borg, Ergin played Lieutenant Coris Sprint, a Starfleet officer whose body is inhabited by the player. Notably, Ergin has worn the colors of each department during his time on Star Trek. Blue on Generations and red and yellow on Star Trek: Voyager.

Born in Hingham, Massachusetts, Ergin is a graduate of Cornell University and was a professional lacrosse player. Since 2005, he has been working as lacrosse coach for the Oak Park Lacrosse Varsity team at Oak Park High School in Ventura County. [6] In April 2016, he was inducted into the US Lacrosse L.A. Chapter Hall of Fame. [7]

Prior to his work on Star Trek, Ergin appeared in two episodes of the television series Red Shoe Diaries (1994, with Saxon Trainor and Allan Graf), in the thriller Improper Conduct (1994, with Matt Roe and Eric Chambers), and in the thriller Indecent Behavior II (1994, with Cole McKay). Ergin also worked as dog trainer between 1996 and 2001. 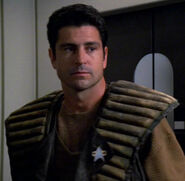 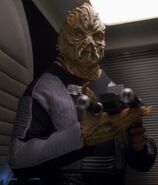 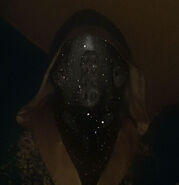 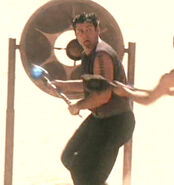 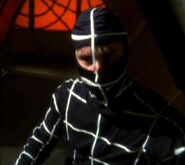 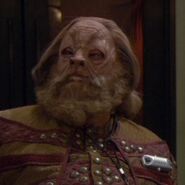