Tau Ceti was an inhabited planetary system in the Alpha Quadrant, located approximately eleven light years from Sol. This system was home to the star Tau Ceti. (TNG: "The Naked Now" production art)

In 2259, the location of this system was labeled on a stellar cartography chart that was seen on the USS Enterprise's ready room viewscreen. The system's symbol had a blue color, indicating that it was affiliated with the United Federation of Planets. (SNW: "Strange New Worlds", "Spock Amok", "A Quality of Mercy")

In 2293, the location of Tau Ceti in the Milky Way Galaxy was named in a star chart that was in Captain James T. Kirk's quarters aboard the USS Enterprise-A. (Star Trek VI: The Undiscovered Country, production art)

In 2364, the location of Tau Ceti was named in a star chart of a stellar neighborhood with Sol at the center. This chart was stored in the USS Enterprise-D library computer. Later that year, the chart was scanned by Outpost 63. (TNG: "The Naked Now" production art; TNG: "The Last Outpost")

The source of this star chart was drawn by Rick Sternbach for the Star Trek Spaceflight Chronology, p. 77. Tau Ceti was among the named stars within twenty light years of Sol, featuring the Earth commercial and exploration routes after the use of warp drive began.

In 2399, the location of Tau Ceti was labeled on a Federation star chart that was in Fleet Admiral Kirsten Clancy's office at Starfleet Headquarters. This system was in or near to Federation space. (PIC: "Maps and Legends")

In 3190, the location of Tau Ceti was labeled on a star chart used by Commander Paul Stamets for tracking the movement of the Dark Matter Anomaly through the galaxy. (DIS: "The Examples") 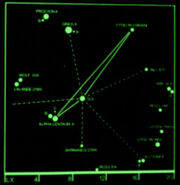 The location of Tau Ceti labeled on a star chart (2364)

The location of Tau Ceti labeled on a star chart (3190)

The Tau Ceti Accords, which were established prior to 2152, were also associated with this location. They defined parameters between the Andorians and the Coridanites. (ENT: "Shadows of P'Jem")

In 2155, in the mirror universe, Tau Ceti was the system in which the Terran Empire lost twelve ships in a battle against alien rebels. Propaganda had spread that this was a major victory for the Terran Empire, when in fact it was a sign they were losing. (ENT: "In a Mirror, Darkly")

When the universal translator on the USS Discovery malfunctioned, one of the many languages the system translated verbal and written displays into from Federation Standard was Tau Cetian. (DIS: "An Obol for Charon")

Prior to stardate 5718, the USS Enterprise, under the command of Captain James T. Kirk, engaged and defeated a Romulan vessel near Tau Ceti, using the Cochrane deceleration maneuver. (TOS: "Whom Gods Destroy")

In Starfleet Academy's Kobayashi Maru scenario, in 2285, Amber on Tau Ceti IV was named as the home port of the tanker/transport Kobayashi Maru. (Star Trek II: The Wrath of Khan)

Some time before 2348, Jean-Luc Picard first met Walker Keel at an exotic bar on Tau Ceti III. Some time after this Keel introduced Jack Crusher to Beverly Howard. (TNG: "Conspiracy")

In 2370, Beverly Crusher, when trying to recall the name of the Traveler, she recalled to him as "you know that alien from Tau Ceti, the one who could control warp fields with his mind?" (TNG: "Journey's End")

According to the Star Trek Encyclopedia (4th ed., vol. 2, p. 375), the Tau Ceti system was some eight light years from Sol.

According to Star Trek: Star Charts (p. 44) and Stellar Cartography: The Starfleet Reference Library ("Federation Historical Highlights, 2161-2385"), the primary of the Kaferia (Tau Ceti) system was a G-class star. In the late 24th century, this was a Federation system, with Tau Ceti III listed as a member.

According to the novel Enterprise: The First Adventure, Tau Ceti was located along the Romulan Neutral Zone and the inhabitants of Tau Ceti II were widely regarded as possessing great mineralogical expertise, using sapphires as the local currency.