She is also a host of Star Trek: The Pod Directive, which began in 2020, alongside her long-time friend and collaborator (and Lower Decks guest star) Paul F. Tompkins. [2] [3]

Newsome commented: "I was a big fan of the '90s trifecta of shows, Star Trek: Deep Space Nine is my number one. I also love The Next Generation and Voyager. Then my mom’s a huge Trek fan. Her favorite series is Enterprise. She’ll go on and on about Enterprise. When I got the audition, first of all its [sic] code named, so I didn't know it was Star Trek". [4]

She starred in Bajillion Dollar Propertie$ (premiering in 2016) alongside Paul F. Tompkins and Star Trek: Lower Decks co-star Eugene Cordero, and was a frequent guest on Tompkins' podcast, Spontaneanation. 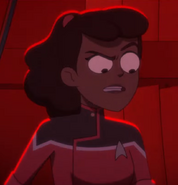