A teddy bear was a stuffed toy created in the shape of a bear, an Earth animal.

In 1986, a teddy bear was among the items for sale at Feinberg's Loan and Pawn. (Star Trek IV: The Voyage Home)

In 1996, the belongings of a homeless Captain Braxton, which he kept in a pushcart, included a brown teddy bear. (VOY: "Future's End")

In 2267, after Spock's mother, Amanda Grayson, described a pet sehlat from his childhood as having been "like a fat teddy bear" (much to the delight of Dr. Leonard McCoy), Spock stated that these Vulcan "teddy bears" are alive, and have six-inch fangs. (TOS: "Journey to Babel")

In 2367, a teddy bear was replicated for a young child in the USS Enterprise-D's replicating center while Data and Worf discussed gifts for Miles and Keiko O'Brien's forthcoming wedding. (TNG: "Data's Day")

In 2368, Deanna Troi received a box from her mother that contained personal items belonging to her father's ancestors, including a teddy bear. (TNG: "The Outcast")

A young girl living aboard the USS Enterprise-D around the time of its destruction in 2371 carried a teddy bear. Along with several other children, she was separated from her parents, requiring Lieutenant Commander Geordi La Forge to carry her to a safer part of the saucer section. The teddy bear was dropped in the scramble and presumably destroyed when the secondary hull exploded. (Star Trek Generations)

Julian Bashir had a teddy bear named Kukalaka. It was his most prized childhood possession, to the extent that he kept it when he reached adulthood. (DS9: "The Quickening", "In the Cards", "Inquisition")

In 2372, The Doctor gave a white teddy bear as a gift to Danara Pel while they were dating on the holodeck of the USS Voyager. (VOY: "Lifesigns")

One of the baby toys for Chief O'Brien's son, Kirayoshi, was a teddy bear. (DS9: "Business as Usual")

In 2374, Harry Kim suggested that Tom Paris replicate a teddy bear to comfort him when nearly the entire crew went into stasis during Voyager's trip through a Mutara class nebula. (VOY: "One")

In 2380, Ensign Bradward Boimler went to see his girlfriend, Lieutenant Barbara Brinson, on the USS Vancouver. He brought her a teddy bear that was dressed in an operations gold Starfleet uniform and a VISOR. (LD: "Cupid's Errant Arrow") 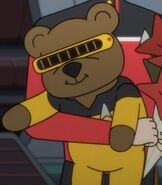 Teddy Bears were named for U.S. President Theodore "Teddy" Roosevelt, who was also referenced in canon.

The script for "The Passenger" describes Lieutenant George Primmin as having "a passing resemblance to a teddy bear".