The telephone, also known for short as the "phone", was a communications device that proceeded the telegraph and was employed on Earth between the latter-19th century and mid-21st century. The technology was also adopted and used by the Iotians during the mid-22nd to mid-23rd century, where it was known as a "blower". (TOS: "A Piece of the Action") The Malcorians also used devices very similar to 20th century Earth phones. (TNG: "First Contact")

In 1930, a Bell System telephone was located in the 21st Street Mission. (TOS: "The City on the Edge of Forever")

A telephone booth was located outside of Alexandria Books in the 21st century. (VOY: "11:59")

In 2004, the Xindi-Reptilian Damron contacted Loomis via telephone when he wished to request another blood sample. (ENT: "Carpenter Street")

In 2259, When Christopher Pike's communicator kept going off, Captain Batel referred to it as "the phone's going off." (SNW: "Strange New Worlds")

In 2286, James T. Kirk lamented to Gillian Taylor when they parted company that "as they say in your century, I don't even have your telephone number." (Star Trek IV: The Voyage Home)

In 2365, a telephone was attached to a computer terminal at the Darwin Genetic Research Station on Gagarin IV. (TNG: "Unnatural Selection")

In 2367, Data communicated with Jean-Luc Picard in a Dixon Hill holoprogram by routing his communication into the telephone in Hill's office, so to minimize disruption to the program. (TNG: "Clues")

In 2370, Lieutenant Commander Data experienced a vision in which an antique telephone was ringing inside his body. When the android opened his chest plate and picked up the receiver, he heard Sigmund Freud on the receiving end, telling Data to "kill them all" before it was too late. This "warning" was later revealed to be in reference to the interphasic creatures that were threatening the crew of the USS Enterprise-D. (TNG: "Phantasms")

In 2373, Q told Captain Kathryn Janeway that he had "taken the proverbial phone off the hook" after she attempted to call security and have him removed. (VOY: "The Q and the Grey")

In 2376, Doctor Lewis Zimmerman sarcastically congratulated Reginald Barclay on establishing a communications link with the USS Voyager in the Delta Quadrant as the "first transgalactic phone call." (VOY: "Life Line")

In an alternate timeline in 2390, Harry Kim told The Doctor that using the temporal transmitter to communicate with Seven of Nine fifteen years in the past was "no ordinary phone call." (VOY: "Timeless") 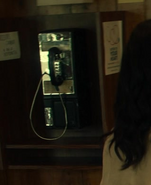 A payphone at the Clinica Las Mariposas in 2024

A telephone at the Darwin Genetic Research Station 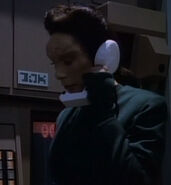 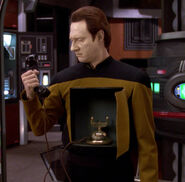 Data on the phone in a dream 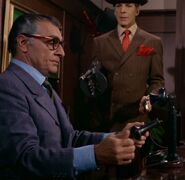