unknown (2268 – 2269)
Cruising on her exploratory mission in deep space, the starship Enterprise was in the uncharted complex of Sigma Draconis… and suddenly, she was not alone!

While exploring the Sigma Draconis system, the USS Enterprise happens upon an unidentified vessel adrift in space. Since the craft doesn't respond to hails, Kirk and Spock take a shuttlecraft to investigate. Donning environmental suits and gaining access through an airlock, they explore the entire ship and find it empty. Suddenly, they hear an intensifying loud whine, knocking them unconscious. Their bodies are then transported away.

On the Enterprise, Montgomery Scott is concerned about Kirk and Spock's extended absence, and takes a security team over to the spacecraft. Finding it empty, Scotty has his men quickly gather some paperwork lying around for clues and leave. Turning the samples over to Uhura in an emergency meeting, the computer deciphers the documents. The papers comprise an incomplete log entry from an Eldorian spy ship, describing a war between the planets of Eldor and Norus. Surmising that the Norusians seized the Eldorian crew, as well as Kirk and Spock, Scott orders the crew to locate planet Norus and prepare the Enterprise's defenses.

Materializing on Norus, Kirk and Spock are apprehended by Norusian soldiers. Kirk tries to explain himself, but is knocked unconscious, and Spock is made to carry him. Arriving at a governmental building, the two are brought before the Norusian "Council of the Wise" and are accused by the President of conspiring with the Eldorians. Kirk again offers an explanation, and the Council decrees trial by combat, unleashing the Moloth, a gigantic crab-like creature.

Kirk and Spock manage to dodge the Moloth's attacks and inflict damage on it, discovering it to be a robot. Spock disables it with a blow to its head, and the Moloth turns on its masters. The president's guard destroys the machine, and Kirk asserts that the victory proves their innocence. The president agrees, but orders the men seized and sent to a slave camp for endangering his life.

Approaching Norus, Uhura explains that communications in the region are jammed. Scotty decides that he must assume Kirk and Spock are being held by hostile forces and calls for a team of volunteers, finding no lack of willing men. The Enterprise speeds toward Norus with defensive systems raised. Suddenly, sensors pick up another ship behind in pursuit. It grazes the Enterprise's force field and then comes about, assuming a parallel course. The craft sends a delegation over to the Enterprise, entering through an airlock.

Commander Karth of the Eldor Space Service warship Lebron introduces himself, apologizing for intercepting the Enterprise so abruptly. Scott concedes that he knows the Eldorians are at war with Norus, and Karth says that Eldorian intelligence reports that Kirk and Spock are being held under close guard. Norus is protected by radiation bombarders as well as transporters employed as weapons. The Lebron is protected by the latest technology, and Karth invites an alliance. Scott accepts the offer, and the combined assault commando force head to Norus on board the Lebron, en route to destroy the underground defense control system located at the capital and pave the way for an invasion.

In captivity, Kirk and Spock become despondent, but decide to go out fighting. When the guards return to mistreat them, the two make a desperate attack and escape. As they move through the dungeon corridors, an intercom blares the announcement of an incoming air assault. Readying their gunnery systems, the Norusians are stunned to find only a single Eldorian ship approaching.

The Norusians bombard the Lebron with no effect. In return, Eldorian missiles obliterate the Norusian gunnery in an explosive fireball. Frantic, the President orders remaining Norusian forces on standby to attack the Eldorians when they land and disembark, unprotected. Karth laughs at the Norusians' plans, and activates the ship's hidden telescopic legs, crushing the remaining ground forces, and forcing the surrender of the survivors. Inside the government Council chamber, the President's men abandon him, preferring to be on the winning side. The Lebron lands, and the commando team invades, gaining control of the capital. Scott's team goes to rescue their commanders with urgency, since the Eldorians set up destructive charges to blow up the capital.

Oblivious to outside events, Kirk and Spock continue to wander the depths of the capital, planning to find the president and take him hostage, bargaining for their release. Turning a corner in the dark corridors, Kirk and Spock are poised for confrontation, expecting to see Norusian soldiers. Instead, they discover Scott and his men, who whisk them outside with only seconds to spare. As the capital explodes and erupts in flame, Scott tells a bewildered Kirk that he has just finished waging a war and will fill him in on all the details later.

"I've got an odd feeling. Something's making my flesh creep…"

"Then where in creation have they gone? Maybe they melted away?"

"Why, you treacherous rat! I don't know what the Eldorians are like, but I sure hope they win the war! They can't be worse than you!"

- Kirk, after being betrayed by the Norusian president

"Do you think they'll kill us, Spock?"
"A certainty. We've got to hope for a miracle, Captain!"
"Whatever happens, I'm going out fighting. Even if we manage to take a couple of Norusians with us, it'll be worth it!"
"You're right. Let's take the very next opportunity…"

- Kirk and Spock, restless in captivity

None of the UK weekly stories had titles. Each installment was two pages in length. 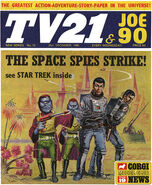 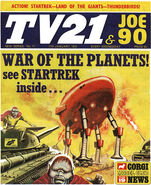