The Teplan homeworld was a planet in the Teplan system in the Gamma Quadrant, just outside Dominion space. It was the home planet of the Teplans.

The planet had an advanced civilization until the mid-22nd century. The Teplans built cities, traveled to neighboring worlds, and believed nothing was beyond their abilities. But when the Teplans defied the Dominion, the Jem'Hadar destroyed their world and introduced the blight into the population.

By the late 24th century the Teplan cities lay in ruins, their civilization destroyed. In 2372, Julian Bashir visited the planet and found a way to stop the blight. (DS9: "The Quickening")

The name of this planet was never given.
According to the
Star Trek: Star Charts (p. 75), the Teplan system was located in or near Dominion space, in the Gamma Quadrant. This system was a single star system. The primary was a class A star with a magnitude of +3, which was ten times the brightness of Sol. 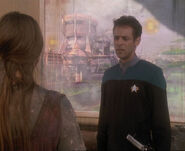 A mural of the planet before it was wrecked by the Jem'Hadar
Add an image to this gallery
Retrieved from "https://memory-alpha.fandom.com/wiki/Teplan_homeworld?oldid=2401055"
Community content is available under CC-BY-NC unless otherwise noted.