Terrence Evans (21 June 1934 – 7 August 2015; age 81) was an actor who played three characters over two of the Star Trek spin-off series, Star Trek: Deep Space Nine and Star Trek: Voyager. For his first part as Baltrim he received credit as co-star in the end credits of the episode although his character did not speak a single word in the episode. For his appearance in the episode "Nemesis", Evans filmed his scenes on Tuesday 17 June 1997 on Paramount Stage 9.

Born in Sharon, Pennsylvania, Evans earned his degree in acting from Carnegie Mellon University. Between 1957 and 1965, he performed in stage plays throughout the United States and in the 1970s he also started to work for film and television. Among his first works are the television western The Young Country (1970, with Steve Sandor), the drama Cody (1977), the drama Falling in Love Again (1980, with John Miranda), and guest roles in episodes of Hart to Hart (1979, with Craig Wasson), The Incredible Hulk (1980, with Bruce Wright, Terrence Beasor, Ted Cassidy, and Charles Napier), Little House on the Prairie (1980), and Quincy M.E. (1981, with Garry Walberg, John S. Ragin, Robert Ito, Joseph Campanella, Clyde Kusatsu, and Michèle Marsh).

Among Evans' last projects are a guest role in the television series Eagleheart (2013, with Pat Healy, Leon Russom, Thomas Knickerbocker, and Rico E. Anderson), the comedy Bigfoot the Movie (2015), and the drama War Room (2015). 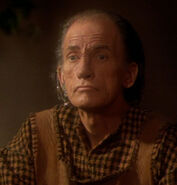 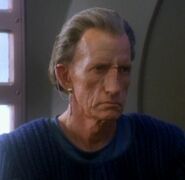 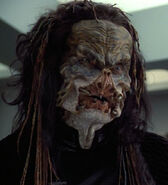 Ambassador Treen
VOY: "Nemesis"
Add an image to this gallery

Retrieved from "https://memory-alpha.fandom.com/wiki/Terrence_Evans?oldid=2667925"
Community content is available under CC-BY-NC unless otherwise noted.