The Ashes of Eden

The Ashes of Eden is a Pocket TOS novel – the first novel in the retroactively-designated Odyssey trilogy – written by William Shatner, in collaboration with Judith and Garfield Reeves-Stevens. Published by Pocket Books, it was first released in June 1995.

The novel details James T. Kirk's last adventure prior to the events of Star Trek Generations.

From the book jacket
For almost three decades, William Shatner has portrayed Star Trek's gallant commander of the legendary Starship Enterprise and her crew. Now William Shatner brings his unique blend of talents as actor, writer, director, and producer, to tell the story only he can, of Captain Kirk's greatest adventure…

The time: six months prior to the launch of the USS Enterprise 1701-B and the tragic loss of Captain James T. Kirk in deep space. The place: Earth, where the galaxy's most renowned hero must now face the specter of retirement and a life devoid of challenge and excitement. But in the apparent twilight of his career, Kirk's path takes an unexpected turn when a mysterious young woman offers him an irresistible adventure – a perilous voyage to an uncharted planet where he will confront the ultimate threat to the fragile peace between the Federation and the Klingon Empire, and the ultimate temptation – a chance to recapture his youth.

In the 24th century, Spock arrives on Veridian III to pay his final respects to his former captain, and greatest friend, James T. Kirk. Kirk risked his life to bring back Spock, but there was no way to bring back Kirk.

In the 23rd century, shortly after the Khitomer Conference (Star Trek VI: The Undiscovered Country), James T. Kirk decides to resign from Starfleet as his old Starfleet Academy nemesis Androvar Drake is appointed commander-in-chief of Starfleet Command. Lacking any drive in his life, Kirk accepts a last chance for adventure with the seductive young Teilani who wants him to protect her paradise planet; so Kirk and Montgomery Scott take the mothballed USS Enterprise-A and head for Chal where a secret Starfleet cabal seek to exploit the planet for all its fountain of youth properties. The rest of the former Enterprise crew hitch a ride on Hikaru Sulu's USS Excelsior and together the crew once again save the Federation. The Enterprise-A is destroyed while defending the Excelsior from Klingon battle cruisers under the direction of Admiral Drake.

Back in the 24th century, Spock is preparing to escort Kirk's body back to Earth, when a ray of light emerges from Kirk's grave. Spock approaches it to investigate, and finds Kirk is gone… 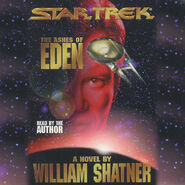 The ship's registry was seen in the comic adaptation, despite having previously been depicted as the same vessel, but numbered NCC-1702, in Debt of Honor and the Star Fleet Technical Manual.

Chal
Planet, homeworld of a colony of Klingon/Romulan hybrids.
Dark Range Platform
Ancient space installation, probably from the time of the Preservers. Used as a base for smuggling and other illegal activities.