The Devil's Heart is a Pocket TNG novel written by Carmen Carter. Published by Pocket Books, it was first released in hardback in April 1993. 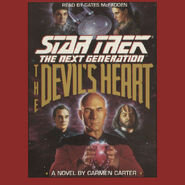 Retrieved from "https://memory-alpha.fandom.com/wiki/The_Devil%27s_Heart?oldid=2452096"
Community content is available under CC-BY-NC unless otherwise noted.