John Noble
The Diviner was an ailing Vau N'Akat male who was from a future point in time after the late 24th century.

At some point in the future after the Vau N'Akat civilization on Solum destroyed itself through civil war, the Diviner was sent back in time to the 24th century to prevent first contact with the United Federation of Planets, the apparent catalyst for the war. (PRO: "A Moral Star, Part 2")

Details from the episode suggest that the earliest possible time that the Diviner could originate from is sometime in the mid 25th century.

As part of his mission, the Diviner was to locate and secure the Federation starship USS Protostar. By 2366, The Diviner had narrowed down the location of the missing starship to Tars Lamora, and established a prison colony there in an effort to find it. The Diviner's operation was overseen by two individuals: his clone "daughter" Gwyn and an artificial lifeform named Drednok.

In 2383, after a Kazon slave trader brought a Caitian child to Tars Lamora, Drednok warned Gwyn that she may not speak for her father, after she warned the Kazon not to bring them another child. (PRO: "Lost and Found")

That same year, the Protostar was discovered by the prisoners Dal R'El and Rok-Tahk. They then managed to escape in the Protostar along with fellow prisoners Murf, Jankom Pog, and Zero, along with Gwyn as a hostage. The Diviner then left Tars Lamora in his ship, the Rev-12, in search of the Protostar. (PRO: "Starstruck")

The Diviner is voiced by John Noble. 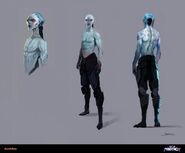 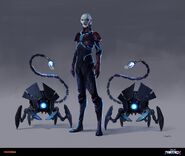