From the book jacket
THE UNIVERSE HAS LESS THAN A CENTURY LEFT… UNLESS SPOCK CAN CHANGE HISTORY!

The Enterprise is summoned to transport a dangerous criminal from starbase prison to a rehabilitation center: brilliant physicist, Dr. Georges Mordreaux, accused of promising to send people back in time – then killing them instead.

But when Mordreaux escapes, bursts onto the bridge and kills Captain Kirk, Spock must journey back in time to avert disaster – before it occurs!

Now there's more at stake than just Kirk's life. Mordreaux's experiments have thrown the entire universe into a deadly time warp. Spock is fighting time … and the universe is closing in on itself with the relentless squeeze of …

A priority message summons the USS Enterprise to the mining colony Aleph Prime, interrupting Spock's study of a new singularity before he can confirm his findings, which seem to indicate that the Universe has less than a century of life left to it.

On Aleph Prime, prosecuting attorney Ian Braithewaite – who finds Spock oddly familiar – claims that no such message was sent; however, since the ship is now here, he asks Kirk to transport a dangerous prisoner to Rehab Colony Seven. Spock is surprised to learn that the prisoner is the noted scientist Dr Georges Mordreaux, who has been found guilty of murder and experimenting on unwilling subjects. Convinced that there's more to the story, Spock orders new security chief Mandala Flynn to have Mordreaux confined to a VIP cabin rather than the detention cells, and to discontinue the regime of drugs that have reduced him to a state of near catatonia.

Kirk is reunited with an old flame, Captain Hunter, and Sulu, who has been considering a transfer for some time, applies for and receives a transfer to Hunter's ship, the Aerfen. Before Sulu leaves, he and Flynn confess their love for each other, but agree that this is the best move for Sulu's career.

The Enterprise sets off for Rehab 7, but Scotty catches a glimpse of Spock in the transporter room when he should be on the bridge, and Spock refuses to explain the discrepancy. Mordreaux escapes from custody and forces his way onto the bridge, where he injures Braithewaite and shoots both Kirk and Flynn with spiderweb slugs, bullets that choke the Human nervous system with organo-metallic fibers. However, the security detail insists that Mordreaux never left his cabin, and a search turns up no sign of the gun. Kirk is soon brain-dead, and Spock convinces the reluctant Doctor Leonard McCoy to terminate life support; however, the semi-conscious Braithewaite misinterprets what he's seeing. Believing that he saw Spock on Aleph Prime before the Enterprise arrived, he becomes convinced that Spock and McCoy are in league with Mordreaux and have deliberately killed Kirk.

Spock questions Mordreaux, who reveals that he's invented a method of time travel that he used to send his friends into the past, where they felt they could find a better life. His discovery has been suppressed by higher-ups in the Federation who fear its potential as a weapon, and he was framed for murder and his research destroyed. It seems that a future version of Mordreaux is responsible for murdering Kirk, and the present-day version agrees to help Spock construct a time-changer to put matters right on condition that Spock not betray Mordreaux's friends.

Spock travels back in time, but fails to save Kirk – and he is spotted in the transporter room by Scott, rousing the engineer's suspicions when the past version of Spock claims never to have been there. Spock returns to the present, where Braithewaite and Scotty now believe that he and McCoy are conspiring to free Mordreaux. Hunter and Sulu return to the Enterprise to help investigate, just as Spock uses the time-changer to go further back – this time to Aleph Prime. McCoy tries to cover for him, but is eventually forced to admit the truth, and despite the lack of evidence, Hunter agrees to give Spock twelve hours in the past when Sulu speaks up on his behalf.

Spock bumps into the younger Braithewaite in Aleph Prime, explaining why the prosecutor believed he'd been there before. He tries to stop Mordreaux from sending the call that summoned the Enterprise, but discovers too late that he's stunned yet another version of Mordreaux, who had traveled back in time to stop his younger self from committing murder. Mordreaux explains that his experiments have caused the entropy effect that Spock noticed, shortening the Universe's life span to less than a century; the knowledge drove him mad, and he traveled back in time to take his revenge on those who'd allowed him to live – including Kirk, who helped Spock defend Mordreaux in the timeline in which he was sent to rehabilitation.

The older Mordreaux releases Spock from his promise, and Spock goes back one last time to convince the younger Mordreaux not to send his friends back through time in the first place. Mordreaux and his friends are skeptical until the older Mordreaux materializes before their eyes and crumbles to dust, his body finally succumbing to the strain of this dangerous means of time travel. Realizing that his older self found death preferable to living with what he'd done, the young Mordreaux agrees to abandon his research of his own accord. Spock returns to the present, where he destroys the time-changer and finds that the Universe is now safe, since none of these events ever happened.

"Hikaru, let me give you some advice. Nobody will believe in you for you."

"I shall endeavor not to return before I leave."

- Spock, in all seriousness, on his attempt at time travel 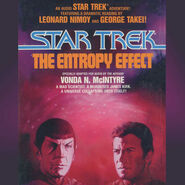 Retrieved from "https://memory-alpha.fandom.com/wiki/The_Entropy_Effect?oldid=2710237"
Community content is available under CC-BY-NC unless otherwise noted.