An awesome weapon from the past returns to menace a new generation!

The Genesis Wave, Book One is a Pocket TNG novel – the first novel in The Genesis Wave series – written by John Vornholt. Published by Pocket Books, it was first released in hardback in August 2000.

From the book jacket
Intended to create life from nothingness, the Genesis Device had the potential to become a weapon of awe-inspiring destructiveness, capable of rearranging matter and life energy on a planetary scale. After the cataclysmic explosion of the Genesis Planet, and the Klingon Empire's attempt to steal the top-secret technology, Starfleet wisely decided to destroy all data and records on Project Genesis, hoping to bury its deadly secrets forever.

But now a mysterious wave of energy is sweeping across the Alpha Quadrant, transforming matter on a molecular level to create bizarre new landscapes and life-forms. Billions of living beings and hundreds of inhabited worlds lie in the path of the mutagenic wave, which is expanding outward toward Earth.

To discover the origin of the wave, Captain Picard and his crew must probe long-buried mysteries. But even if he can uncover the shocking history of the Genesis Wave, is there any way to save the future from its unleashed fury? 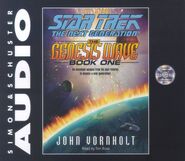 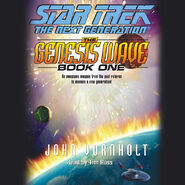 Retrieved from "https://memory-alpha.fandom.com/wiki/The_Genesis_Wave,_Book_One?oldid=2452124"
Community content is available under CC-BY-NC unless otherwise noted.