Who has unleashed an awesome threat against the entire Alpha Quadrant?

The Genesis Wave, Book Two is a Pocket TNG novel – the second novel in The Genesis Wave series – written by John Vornholt. Published by Pocket Books, it was first released in hardback in April 2001.

From the book jacket
Like an unstoppable cosmic storm, the dreaded Genesis Wave sweeps across the Alpha Quadrant, transforming planets on a molecular level and threatening entire civilizations with extinction.

To combat the rushing terror of the wave, Captain Jean-Luc Picard and the crew of the starship Enterprise have been forced into a tense alliance with the Klingon and Romulan Empires, both of which crave the forbidden secrets of the Genesis technology for themselves. Now the finest minds of three civilizations must race against time to find some way to halt the deadly wave before yet another world is transformed into something alien and unrecognizable ... 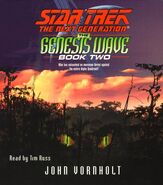 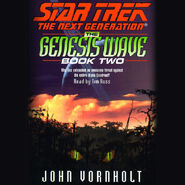 Retrieved from "https://memory-alpha.fandom.com/wiki/The_Genesis_Wave,_Book_Two?oldid=2452125"
Community content is available under CC-BY-NC unless otherwise noted.