←
3013.1 (2267)
→
2254
While Spock faces court martial for kidnapping Captain Pike and hijacking the Enterprise, he further explains his actions with mysterious footage about Pike's captivity by the Talosians.

The viewscreen presentation continues: The Talosians beam down Number One and Yeoman Colt to give Pike a choice of mates, but their laser pistols do not work. Pike deduces that this too is an illusion and uses a weapon to threaten the Talosian Keeper and win their way to the planet's surface.

The Talosians had abandoned their effort to capture and breed Humans as servants when Captain Pike and the others threatened to destroy themselves using a forced chamber explosion with Una's laser pistol, a decision the atrophied Talosians had claimed condemned them to eventual death. Vina had declined rescue by the Enterprise, for a reason made evident at the end of the Talosians' presentation: the Talosians show Vina to be horribly disfigured, though their mastery of projecting illusions lets her live a normal life. Spock's purpose in bringing Pike back to Talos IV was to enable Pike to live out the rest of his days in the same fashion; the Talosians offer to "free" him from his wheelchair. The basis of General Order 7, the capital crime forbidding contact with Talos IV, is also evident now: to keep Humans from learning the Talosians' power of illusion which would lead to their own destruction.

The real Commodore Mendez, still at Starbase 11, sends a message that he too has received the Talosians' presentation. Uhura reports to Kirk that he has suspended General Order 7 for this occasion and directs Kirk to proceed as he thinks best.

Kirk asks Pike if he wishes to accept the Talosians' offer. Despite his earlier protests against Spock's actions, Pike does not hesitate to signal "yes", and Kirk invites Spock to escort his former captain to the transporter room. Spock expresses thanks, both for himself on Pike's behalf, which Pike is quick to second with another "yes." Before Spock wheels Pike out, however, Kirk adopts a mock serious tone, saying he is "concerned" that Spock is exhibiting a disturbing tendency toward flagrant emotionalism. Spock regards this as an insult and insists that his actions have been completely logical.

After Spock and Pike depart the briefing room, the Talosian Magistrate invites Kirk to look at the viewscreen again, where he sees the healthy Pike and Vina walking hand-in-hand. 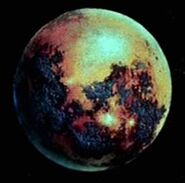 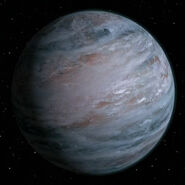 …and the enhanced Mojave
The next remastered episode to air was "The Corbomite Maneuver".