The Enterprise crew is intoxicated by an inhibition-stripping contagion that causes mayhem throughout the ship.

The USS Enterprise orbits the planet Psi 2000, a world that was much like Earth in its distant past, tasked to observe the planet's impending disintegration. Lieutenant Commander Spock and Lieutenant junior grade Joe Tormolen beam down in environmental suits to a frozen surface laboratory and investigate the horrific deaths of the lab's scientists. Carelessly, Tormolen removes a glove of his suit to better scratch his nose, unknowingly exposing himself to a red, blood-like liquid substance leaping to his exposed hand from a frozen wall. Spock contacts the Enterprise and informs Captain Kirk that all of the station's personnel are dead. Kirk asks what caused it and Spock replies, "Unknown, captain. It's like nothing we've dealt with before."

The landing party returns to decontamination on the transporter pad, and undergo further examination and clearance by Doctor McCoy. Tormolen's sudden anguish over the surface deaths, something that didn't faze him previously, is brushed off with an order by Captain Kirk for him to rest.

Captain Kirk and his senior officers discuss the possible causes of the madness displayed on the surface in the briefing room. Concerned about the planet's break-up and the crew efficiency needed to maintain a tricky orbit for their observations, Kirk asks if the surface tragedy could happen aboard the Enterprise. Spock admits to limitations in their scanning technology as space still contains infinite unknowns, but Scott is confident in his engines, as long as the bridge crew stays sane. Early stages of the planet's destruction begin.

Tormolen, aggravated by his hand and sweating, sits in the Enterprise's recreation room, getting something to eat from the food synthesizer. Entering in a jovial mood, Lieutenant Sulu tries to sell Lieutenant Kevin Riley on the virtues of fencing after previously trying to interest the Enterprise's navigator on botany. An effort to bring Tormolen into the conversation triggers a hysterical response. Tormolen brandishes his table knife and rants about the futility of life in space. He says "what are we doing out here in space? Good? What good?! We're polluting it, destroying it!". His mood quickly turns to despair and he turns the knife on himself. Sulu and Riley try to wrestle it away unsuccessfully, as Tormolen falls and impales himself. Riley runs over to the room's intercom calling for medical assistance and he begins to sweat on his hands profusely.

McCoy and Nurse Chapel fail to save Tormolen's life, despite the fact that "his wounds were not that severe", leaving a confounded McCoy to speculate his patient had simply lost his will to live.

Psi 2000's breakup accelerates, and the crew follows. Sulu and Riley, now at their helm and navigation consoles and showing signs of infection, are slow in making a necessary orbital correction. Sulu abandons the helm in favor of some exercise to "take the edge off," encouraging Riley to join him. Riley remains, but soon becomes flamboyantly insubordinate to Spock, sporting an exaggerated Irish brogue. Reporting briefly to sickbay as ordered, Riley learns of the death of Tormolen from Nurse Chapel, and attributes his friend's bad luck to the fact that he wasn't born an Irishman. Riley then proceeds to flirt with Nurse Chapel, touching her face and infecting her. Sulu, now fantasizing himself a musketeer, stalks the corridors with a foil and frightens off two crewmen. Deeper in delusion, he returns to the bridge and takes Uhura, declaring her a "fair maiden" (despite her protest that she was neither), under his "protection" before Kirk jumps him from behind and Spock subdues him with a Vulcan nerve pinch.

The planet convulses, but the helm is unable to respond. A call to engineering is answered by "Captain" Kevin Thomas Riley, who has expelled Scott and crew and begun the ship-wide broadcast of a one-man musical/comedy show, including a very off-key version of "I'll Take You Home Again, Kathleen", to the great annoyance of Kirk and Uhura (who are unable to turn off the broadcast). Without power, the Enterprise is twenty minutes from destruction, and the affliction continues to spread throughout the crew.

Spock tours the ship, urging Scott to hurry in re-taking engineering, observing the madness of crewmen, and checking on McCoy's progress. Chapel is emboldened, confessing her love for Spock and infecting him with the touch of her hand, affecting him quickly. He insistently blurts "I am in control of my emotions." Ignoring repeated hails from Uhura, Spock begins losing composure in the corridors (a crewman writes "love mankind" in red paint on a door, not helping him at all) and secludes himself in the briefing room trying to regain control by stating his duty and counting by twos before he suffers a complete loss of his emotional control.

Kirk, Scott, and two security officers recapture engineering and Riley is taken away by security, but Scott discovers Riley has shut the engines down completely; a normal restart requires at least thirty minutes. The Enterprise, now skimming Psi 2000's upper atmosphere, only has eight to spare. "I can't change the laws of physics; I've got to have thirty minutes!", Scott declares to Kirk.

A cold-restart with a controlled matter-antimatter implosion in balanced engines is possible, but requires Spock's attention. Meanwhile, McCoy has discovered a cure for the affliction, after administering it to Sulu.

Kirk finds his first officer in anguished reflection, regretting his inability to express love even for his mother. Kirk slaps him in the face hard, and Spock admits to feeling shame over his friendship with the captain. Struck again, he responds in kind, sending Kirk backwards over a table, infecting him.

Kirk haltingly advises Spock that he's better off without love, and rhapsodizes over his great affair, the Enterprise, and the price she exacts. Kirk suddenly shouts out and admits "I have a beautiful yeoman!". Self-awareness returns to Spock, who proceeds to help Scott with the restart. Kirk finds the strength to return to the bridge with quiet words to his ship, "Never lose you… never." Entering a turbolift and heading to the bridge, Kirk sees "SINNER REPENT" painted on the inner door. Seeing this, he wipes away blood from the corner of his mouth.

Entering the bridge, Kirk's uniform is ripped by McCoy, who administers the antidote to the captain. Taking the center seat, Kirk's orders are muddled, but a cured Sulu is able to plot the escape from orbit. With a hesitating reach, Kirk longs for his beautiful Yeoman Rand, standing next to him, whom he can't touch but for duty. Spock and Scott finish preparations, and the restart is engaged. The implosion is successful with an unexpected result, sending the Enterprise three days back in time. Perhaps deciding not to return to Psi 2000, Kirk orders a course ahead, warp factor 1.

"Your blood pressure is practically nonexistent, assuming you call that green stuff in your veins blood."
"The readings are perfectly normal for me, doctor, thank you. And as for my anatomy being different from yours – I am delighted."

"Get off me! You don't rank me and you don't have pointed ears! So just get off my neck!"

"And now crew, I will render Kathleen… ONE MORE TIME!"
"Please, not again."

-Riley over the intercoms, and Kirk’s exasperated response.

"Well, we're doing everything that's possible."
"Bones, I want the impossible checked out, too."

"Have no fear, O'Riley's here. And one Irishman is worth ten THOUSAND of you-"
"You're relieved, Mr. Riley! Lt. Uhura, take over his station."
"Yes sir."
"Now that's what I like. Let the women work too! Universal suffrage!"

- Riley, as Spock relieves him from duty, and replaces him with Uhura

"You know what Joe's mistake was? He wasn't born an Irishman."

- Riley to Chapel, on Tormolen's death

- Sulu and Uhura, after Sulu enters the bridge with a sword

"I'd like you to teach me that sometime."
"Take D'Artagnan here to sickbay."

- Kirk and Spock, after Spock applies the Vulcan nerve pinch on Sulu

"Who's this?"
"This is Captain Kevin Thomas Riley of the starship Enterprise."

- Kirk and Riley, as Riley takes over engineering

"I canna' change the laws of physics. I've got to have thirty minutes."

- Scott to Kirk, on restarting the engines

"My mother… I could never tell her I loved her."

"This vessel. I give, she takes. She won't permit me my life. I've got to live hers."

"I have a beautiful yeoman! Ever noticed her Mr. Spock? You're allowed to notice her! The captain's not permitted!"

- Kirk to Spock, on Rand

- Kirk, to the Enterprise

"Since the formula worked, we can go back in time, to any planet, any era."
"We may risk it someday, Mister Spock."

- Spock and Kirk, on time travel

During the syndication run of Star Trek, the following scenes were typically cut from broadcast

The original shot of the surface of Psi 2000

The new digital Enterprise enters orbit of the remastered Psi 2000 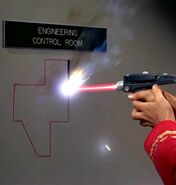 Scotty's phaser gets a beam
Add an image to this gallery

Retrieved from "https://memory-alpha.fandom.com/wiki/The_Naked_Time_(episode)?oldid=2751151"
Community content is available under CC-BY-NC unless otherwise noted.