You might also be looking for the comic book "The Return!".

The Return is a Pocket TOS novel – the second novel in the retroactively-designated Odyssey trilogy – written by William Shatner with Judith and Garfield Reeves-Stevens. Published by Pocket Books, it was first released in hardback in April 1996.

A sequel to The Ashes of Eden, the novel sees James T. Kirk brought back to life following his death at Veridian III by an alliance of Borg and renegade Romulans who hope to use him for their own ends.

From the book jacket
Veridian III: A world has been saved, the USS Enterprise 1701-D lies in ruins, and one of the galaxy's greatest heroes rests beneath a simple cairn of rocks on a lonely hillside. But as a legendary Vulcan ambassador comes at last to the grave of his best and dearest friend, the adventure is only beginning.

The Borg and the Romulan Empire have joined forces against the Federation, and their ultimate weapon is none other than James T. Kirk, resurrected by alien science to destroy the Borg's most formidable enemy: Jean-Luc Picard.

Commander Riker and a group of security officers are preparing to meet Ambassador Spock so that he may come to give his final respects to James Kirk on his final resting spot. But they are halted by messages of attacks on the Federation base overseeing the dismantling of the USS Enterprise-D. The team beams over leaving Spock to sit and wait for their return.

Riker and his team beam into a war zone, as several small fighter craft are firing at the off-guard Starfleet personnel. He and another officer manage to get a small shuttle and fire on the craft, but as they are taking off, they fire one last blast into the crowd, wounding Riker and killing his companion. The officers and crewmen are confused as to who would want to attack Veridian. Meanwhile in orbit, the shattered hulk of the USS Farragut floats dead, the victim of a Romulan disruptor. The Romulans turn and enter warp, having captured their prize: Kirk. 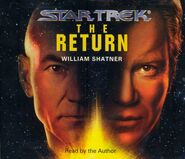 James T. Kirk
Resurrected by Borg and Romulan technology. Kirk is programmed with memories of a happy life among the Romulans, as well as a remembrance of his colony's destruction at the hands of Starfleet Captain Jean-Luc Picard

Named for the Tomed Incident.

USS Challenger
Galaxy-class Federation starship. In 2371, under command of Captain Simm, the Challenger was docked at Deep Space 9.

This appears to be the same vessel that later appears in VOY: "Timeless", since that episode depicted a Galaxy-class Challenger with the registry NCC-71099, indicating that ship was likely commissioned before the time of this novel.

USS Hoagland (β)
Miranda-class Federation starship lost in 2367 at the Battle of Wolf 359. Part of this ship's hull structure was used in the construction of a Borg unicomplex in a transwarp conduit.