Blurb (1st edition)
Celebrate 50 years of one of the longest running and beloved sci-fi franchises with The Star Trek Book. This comprehensive guide to the series delves into the myriad worlds and different dimensions visited by the crew of the USS Enterprise.

Discover the amazing science of Star Trek and how it has influenced real-world technology such as flip phones. Featuring informative and analytical text combined with exciting photography and infographics throughout, The Star Trek Book is broken down into main categories such as science and technology, Starfleet, allies and enemies, and more.

Perfect for fans of the various Star Trek TV series, including The Next Generation, Deep Space Nine, Voyager, and Enterprise, The Star Trek Book details everything you need to know about 50 years of excitement and adventure on the final frontier.

Re-engage! The new edition of The Star Trek Book takes readers even further into one of the greatest science fiction universes ever created. This unique, insightful, and comprehensive examination of an enduring, much loved franchise features every era of Star Trek in one volume, from the pioneering 1960s TV series to the latest movies and streaming shows, including Star Trek Beyond, Star Trek: Discovery, Star Trek: Picard, and Star Trek: Short Treks.

Written by Star Trek experts, this book is packed with stunning film and TV stills, illuminating infographics, and incisive, specially curated essays that unlock the mysteries of the ever-expanding Star Trek Universe. From new and legendary heroes such as James T. Kirk, Jean-Luc Picard, and Michael Burnham to iconic villains like Khan, Q, and the Borg, to fascinating alien species like the Vulcans, Klingons, and Ferengi, this book explores the central characters, technology, civilizations, and events that have shaped the complex, epic story of Star Trek.

Resistance is futile. This is the (star) trek of a lifetime you don’t want to miss! 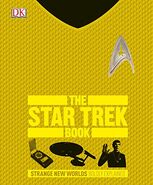