The Star Trek 1998 Calendar is the 1998 edition of the Star Trek: The Original Series calendar series.

Publisher's description
The mirror universe! Klingons loose on the starship Enterprise! The secret of Talos IV! These unforgettable moments and more from The Original Series are frozen in time for this yearlong celebration of the best-loved and most enduring science fiction saga in history. Relive the intrepid exploits of Captain Kirk, First Officer Spock, and the rest of the crew as they go to warp for unparalleled adventures across space and time!

Featuring a cover and a 12" × 24" centerspread with breathtaking ALL-NEW images of the "classic" starship Enterprise, this calendar also offers twelve months of rare stills of the legendary characters we all know and love. 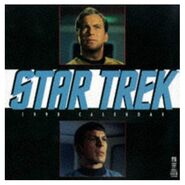 Center fold
Add an image to this gallery

Retrieved from "https://memory-alpha.fandom.com/wiki/The_Star_Trek_Calendar_(1998)?oldid=2425092"
Community content is available under CC-BY-NC unless otherwise noted.