Blurb
The Star Trek 2011 Calendar captures the spirit of the original Star Trek with a full-color image from both television and motion pictures. The calendar also includes actors' birthdays and a center pull-out with original art not found elsewhere. 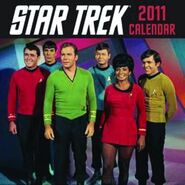 Preview cover
Add an image to this gallery

Retrieved from "https://memory-alpha.fandom.com/wiki/The_Star_Trek_Calendar_(2011)?oldid=2711338"
Community content is available under CC-BY-NC unless otherwise noted.