The Star Trek 2013 Calendar is the 2013 edition of the Star Trek: The Original Series calendar series.

From the back cover
"Space, the final frontier. These are the voyages of the starship Enterprise. Its five-year mission: to explore strange new worlds, to seek out new life and new civilizations, to boldly go where no man has gone before."™

Created by Gene Roddenberry in 1966, the original 79 episodes of Star Trek have inspired numerous television spin-off series, nearly a dozen feature films, and countless books, comics, and games, becoming arguably the ultimate science fiction franchise of all time. Collecting 24 iconic images from the classic original series and a bonus poster, Star Trek 2013 gives the legions of proud Trekkers exactly what they love the most about Star Trek. 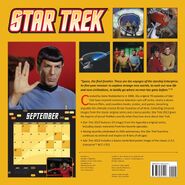 Retrieved from "https://memory-alpha.fandom.com/wiki/The_Star_Trek_Calendar_(2013)?oldid=2425036"
Community content is available under CC-BY-NC unless otherwise noted.